The Hebrew Prayer for Peace 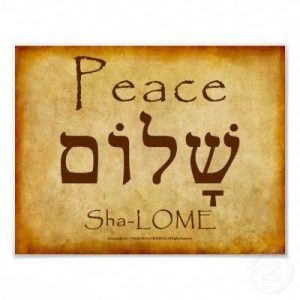 Some days ago, in The Ledger I read the article about the local Service for Remembrance held following the mass shooting at the Tree of Life congregation in Pittsburgh. The service was led by Rabbi Goldstein of Temple Emanuel in Lakeland. The service included candlelight and prayers were offered as people of different faith traditions gathered to show support of grieving Jewish brothers and sisters. The report said that Rabbi Goldstein closed the service with the Hebrew Prayer for Peace.

I was curious to learn the words of this prayer. My first thought was to “Google” Hebrew Prayer for Peace, which yielded several prayers for peace. I still was left wondering which prayer Rabbi Goldstein used. Therefore, I called my local rabbi, Rabbi Goldstein, introduced myself and requested the words of the prayer, He retrieved his prayer book and then read them to me in Hebrew. It is important for you readers to know that Dr. Negley and I “learned?” Hebrew in the January term of our middle (2nd) year of seminary at Columbia. One professor said, “NO ONE could learn Hebrew in that length of time!” We were introduced to the language, but that’s about all you could say, so I was grateful the rabbi followed up with this English translation.

The Hebrew Prayer for Peace that Rabbi Goldstein used was: “May the One who ordains universal peace bring peace to us and to all the people of Israel.” This prayer is for peace for all people. I am reminded of Psalm 29:11b which states, “May the Lord bless His people with peace.” As I write this devotional, we have had another mass shooting, this time in Thousand Oaks, California. We lament the great sorrow one person’s actions have caused and we mourn with the grieving families and we pray for those injured, scarred, and wounded by this tragedy. We do long for peace!