The Homecoming: A Christmas Story (1971) 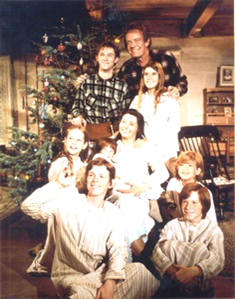 The Homecoming: A Christmas Story is a made-for-television movie that aired on CBS on Sunday, 12/19/1971 and led to the “The Waltons” TV series that debuted on CBS on Thursday, September 14, 1972. The story is about a family during the Great Depression whose father is working 50 miles from home and has not returned by the expected time due to blizzard conditions on Christmas Eve in 1933. There are plenty of religious themes in this film. For instance, one specifically is the helpfulness of others. Ike Godsey, the grocer, generously offers to practically give Olivia a doll for Elizabeth. Charlie Sneed (The Robin Hood Bandit) brought turkeys to families in need and then loaned his car to John Boy when he needed it to go look for his father. Kindly Hawthorne Dooley, the preacher, goes with John Boy to seek out the Baldwin sisters for some fuel when John Boy ran the car out of gas. And the elderly spinster Baldwin sisters provide their horse drawn sleigh to continue the search until they encountered a fallen tree. There is also a nativity scene depicted in the movie as presented by the children of a local church.

Why I like the film so much and how it became a holiday viewing tradition with me: While I didn’t see this film when it aired originally, I like this movie because it reminds me of how much my daughters loved watching the Waltons on TV while growing up. The film shows us that the holidays are a time to spend with family even if one member isn’t present.

Tender God, we thank You that You have provided families for us. Sometimes they are related to us by blood, friendship, or though the bond of Christ Jesus. We praise You that we are not alone and through it all, Your love will sustain us. In Jesus’ name we pray. Amen.