The Day of Resurrection 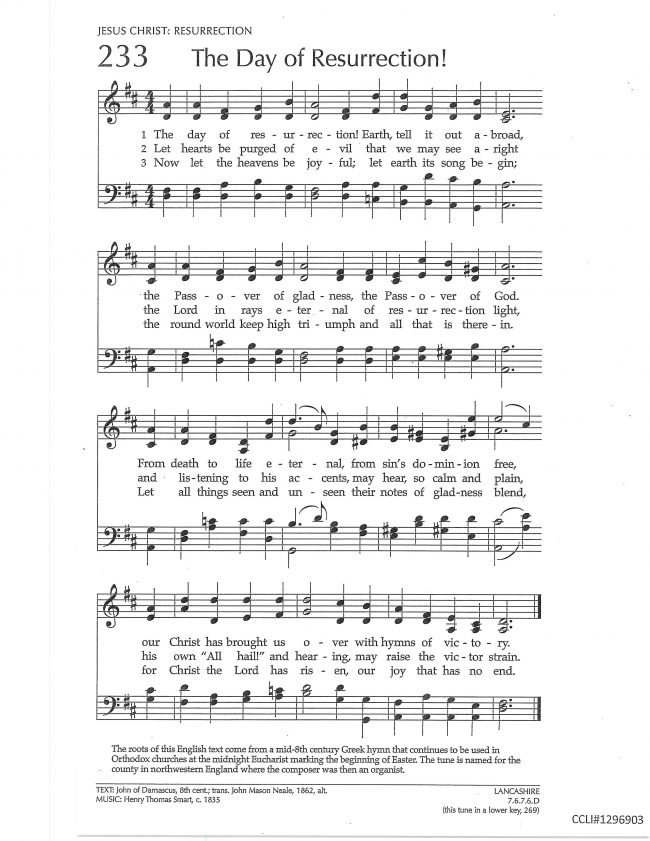 You are a game show contestant and instead of being asked to name five Christmas carols, which you could have done in a flash; you have been asked to name five Easter hymns. The clock is ticking and the theme music is winding down. You know two hymns, but you are struggling to come up with three more titles. It is then that you wish your knowledge of Easter hymns was as good as your familiarity with Christmas carols.

In the twenty years I have served as your Associate Pastor, the church has used three Presbyterian hymn collections. An old red hymnbook, The Hymnbook was compiled in 1955. The Presbyterian Hymnal (Hymns, Psalms and Spiritual Songs) was published in 1990. Our most recent hymn collection, Glory to God became available for use by the churches in 2013. Over the years the hymns designated for Eastertide have increased from seven to twenty to twenty-nine in our latest hymnbook. Six Easter hymns have found their way into all three books, but we begin our short survey of Easter hymns by focusing on this one whose title The Day of Resurrection is another name for Easter.

The Day of Resurrection dates back to the early 8th century and it was written by John of Damascus. Much later it was set to music by J. Michael Haydn. It was rooted in the history of the Greek Orthodox Church. A collection of Greek hymns was found and John M. Neale served as translator. Neale as translator also gave to Christendom O Come, O Come Emmanuel and All Glory, Laud and Honor. These are three hymns that enrich our worship on special days and in special seasons

Blessed Lord, we are especially cheerful on Easter or The Day of Resurrection. Indeed it is that happiest day of the Christian year. We thank You for this great hymn that celebrates the good news of Easter. In Jesus’ name, we pray. Amen.