The Strife Is O’er 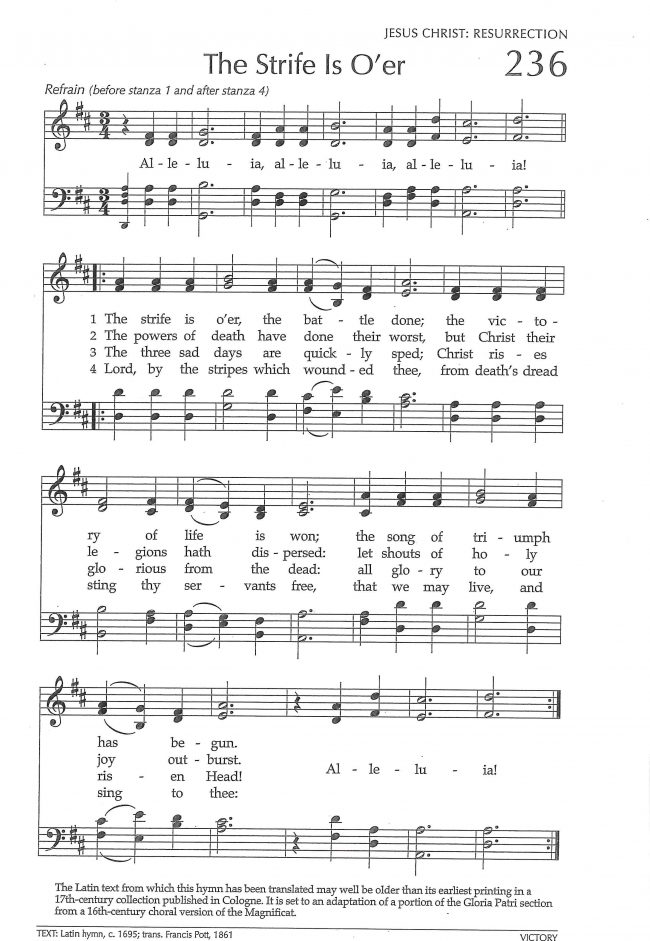 When Jesus received the wine, he said, “It is finished!” Then he bowed his head and gave up his spirit.
John 19:30

The text of this Latin hymn dates back to the late 1690s. The music is that of Giovanni P. da Palestrina, who died almost 100 years prior to the text being paired with his music. The hymn was first found in a Jesuit collection. English-speaking churches did not use this hymn until nearly 150 years. In 1861 it appeared in the historic Anglican hymnal Hymns Ancient and Modern.

What we see in this hymn are statements of fact about the passion of our Lord followed by Alleluias. Alleluia is a Latin form of the Hebrew Hallelujah, which means “Praise the Lord.”

O Lord, when we recount Your suffering … the lashes of the whip, the nails piercing Your flesh, the spear thrust into Your side, the crown of thorns pressed upon Your brow, being abandoned by Your disciples, being denied by one disciple, being betrayed by still another, being mocked and shamed, hearing the cries for Your crucifixion and feeling utterly rejected by all, we are amazed that You endured all of that for us. With love and gratitude, we praise You. In Christ’s name, we pray. Amen.