Alleluia, Alleluia! Give Thanks 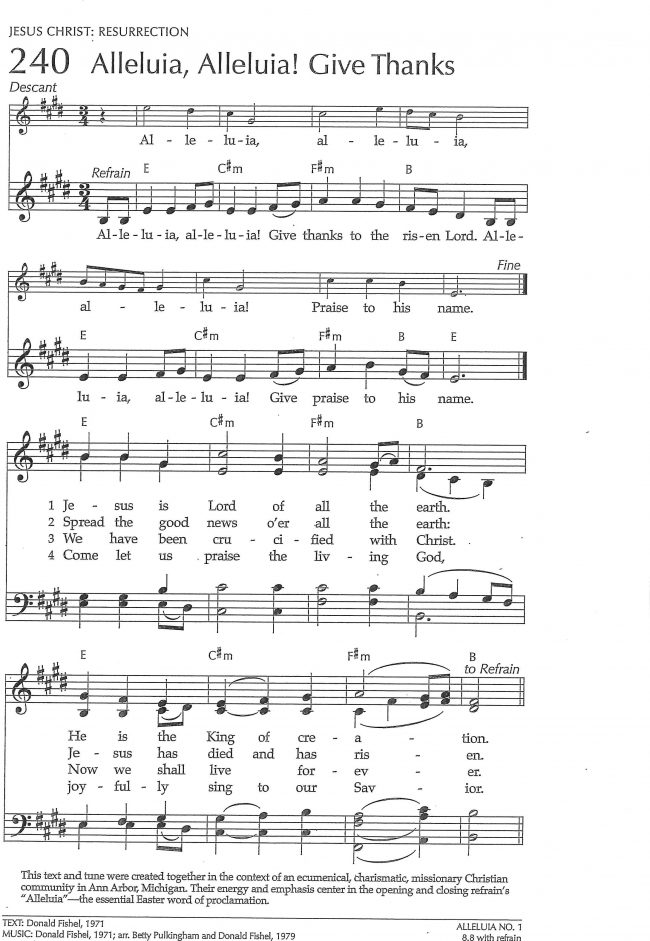 Rejoice always. Give thanks in all circumstances, for this is the will of God in Christ Jesus for you.
I Thessalonians 5:16, 18

Who would have thought that this modern hymn would have come to us from a Roman Catholic? Following the Second Vatican Council, Roman Catholic composers wrote many new songs for congregational singing in a variety of musical styles. The folk style became very popular as guitars were often readily accessible for accompaniment and the tunes were easy to sing. Alleluia, Alleluia! Give Thanks is one of the songs of that era and style that has stood the test of time. Donald Emry Fishel is the author and this was his first song. The refrain is easily learned and memorized.

Several years ago we began singing the refrain during Eastertide in place of The Gloria. The congregation has accepted this change well and seemingly appreciates using a different response to the Assurance of Pardon.

While Alleluia, Alleluia! Give Thanks is designated for Easter; inasmuch as every Lord’s Day is a little Easter, it could be used every Sunday. I love the Gloria Patri, but I must acknowledge that I appreciate the variety. I hope you like it too!

Dear God, we love the “tried and true” when it comes to elements of our worship. We also admit that we have sometimes been pleasantly surprised when something new grows on us and in time we discover that we really like it and wonder why we did not readily accept it in the beginning. We thank You for new songs and the “golden oldies” of hymnody. Help us to keep our worship fresh and exciting as we sing to You new songs of praise. In Christ’s name, we pray. Amen.