In the Bulb There Is a Flower 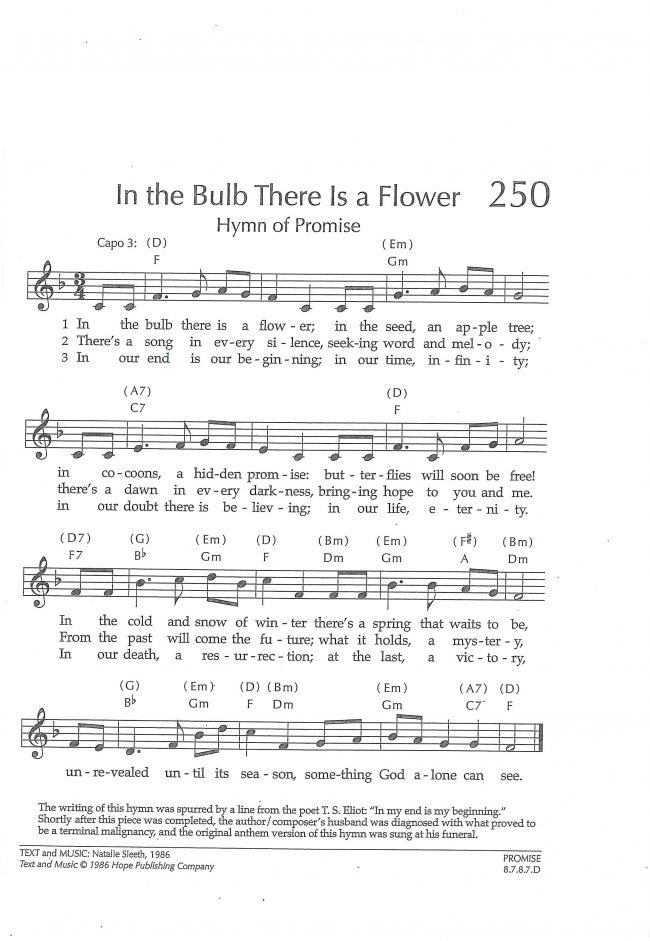 For everything there is a season and a time for every matter under heaven.
Ecclesiastes 3:1

I loved this hymn from the first time I heard and sang it. I remember that it was at a Service of Witness to the Resurrection of a fellow minister in the Presbytery of the Peaks while I was living in Virginia. I was struck by the gentle melody and the sound theology of the hymn. It was comforting and reassuring. It was through this hymn; actually it began as an anthem, Hymn of Promise, that I became acquainted with its hymn writer, Natalie Sleeth and some of her other compositions.

Natalie Sleeth was a native of Evanston, Illinois. She began studying piano at age four. She received a BA in music theory, piano and organ from Wellesley College in 1952. She married Ronald E. Sleeth a United Methodist pastor and professor of homiletics at Perkins School of Theology. Natalie composed her first anthem, Canon of Praise in 1969. She wrote over 200 choral works. A T.S. Eliot line “in our end is our beginning” inspired her to write and compose Hymn of Promise. While this hymn has become quite popular for funerals we have incorporated it into almost every Bright Sunday celebration since 1999. This hymn found its way into our newest Presbyterian hymnbook, Glory to God. Another of her compositions we have used is Light One Candle in conjunction with the lighting of the Advent Wreath,

While Ms. Sleeth composed a number of choral pieces, I believe her greatest gift to Christ’s Church is Hymn of Promise. It long ago became a favorite hymn of mine and it still is!