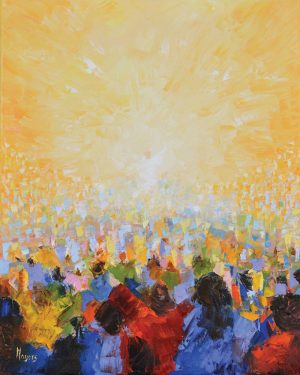 When Jesus arrived, he found that Lazarus had already been in the tomb for four days. Now Bethany was near Jerusalem, some two miles away, and many of the Jews had come to Martha and Mary to console them about their brother. When Martha heard that Jesus was coming, she went and met him, while Mary stayed at home. Martha said to Jesus, ‘Lord, if you had been here, my brother would not have died. But even now I know that God will give you whatever you ask of him.’ Jesus said to her, ‘Your brother will rise again.’ Martha said to him, ‘I know that he will rise again in the resurrection on the last day.’ Jesus said to her, ‘I am the resurrection and the life. Those who believe in me, even though they die, will live, and everyone who lives and believes in me will never die. Do you believe this?’ She said to him, ‘Yes, Lord, I believe that you are the Messiah, the Son of God, the one coming into the world.’

The deep sigh of the early Christian church was “come Lord Jesus, come soon” (1 Cor. 16:22; Rev. 22:20) as believers deeply believed Jesus’ return would be right around the corner and the promised new life in him could begin. Yet, as we open our eyes today to another sunrise, Christ has not returned. We wrestle, too, with what does it truly mean to believe in the Life found in Christ Jesus that is to change everything and the reality of death’s sting? Though Martha closes this scripture with an affirmation of faith, there is still a note of disappointment in Jesus. There is still pain in the lost of a brother. We could be Martha. When the realities of this world’s brokenness, pain and the ultimate cut off from our loved ones of death overwhelm and darken our sights its hard to be that confident voice of Martha. Maybe we can imagine Martha saying in a whisper? Maybe we can hear her saying between choking tears and her voice shaking? Maybe she can’t meet Jesus’ eyes just yet. But she responses affirmative just the same. Do you?

Jesus, the Christ of Eternal Hope, we, in whatever voice rises from within us, pray with our whole hearts, come Lord Jesus, come soon. We ask Your strenght to uphold us and sustain us in this between time. May Your grace be sufficient. Amen