The Lord Will Provide 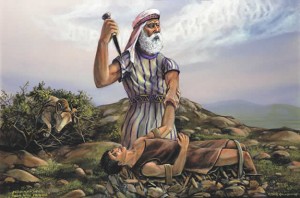 “Abraham built an altar there and laid wood in order. He bound his son Isaac, and laid him on the altar, on top of the wood. Then Abraham reached out his hand and took the knife to kill his son.” Genesis 22:1-19 (NRSV)

Among my earliest memories are those of attending Sunday school at the Baptist Church, where my parents were members. Now I readily admit that I was a sensitive child, but I never recall having been frightened by this story as many young children often are. I heard it many times and you must admit that it really is a very frightening story … to visualize Abraham with a knife in his raised hand ready to plunge into his son, Isaac’s body. As well as I recall, the illustrations of the story were rather graphic for the era in which I grew up, which means those illustrations pale in comparison to what we would describe as graphic today.

I really do not know why this story did not terrify me. Even at that young age I had heard so many times that “God is love.” I suppose that I could not reconcile a loving God really having this doting father to sacrifice the life of his son. I suspect that I expected the story to end as it did with God stopping Abraham in the nick of time from sacrificing the life of his son, Isaac.

God had issued this command to test how faithful Abraham would be. Would Abraham be willing to sacrifice the life of his own son in order to demonstrate his faithfulness to God? Would he be obedient to God’s will even though such faithfulness would require him to give up that which was most precious to him … his son, Isaac, for whom he had waited for so long? Abraham passed the test with flying colors by showing God he was willing.

A sacrifice was still needed and just then a ram was caught in the thicket. Abraham took the ram and used it for a burnt offering instead of his son. Abraham called this place, “The Lord will provide.” God saw that Abraham was faithful and God said, “Because you have done this, and have not withheld your son, your only son, I will indeed bless you, and I will make your offspring as numerous as the stars of the heavens and as the sand that is on the seashore.”

Dear God, no less than Abraham are we tested by You to see how faithful we are. While our tests will not be like that of Abraham, they will still assess our willingness to put You first in our lives and our willingness to be obedient to what You ask us to do. Help us to be Your faithful and obedient servants always. In Christ’s name, we pray. Amen.