The Mystery of Santa 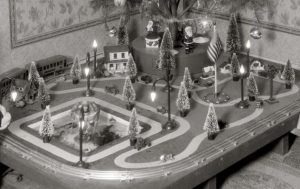 Yes, of course, I do remember the year that I received my favorite toy for Christmas.., It was 1957. My brother and I made a pact to stay up late. We had opened packages from relatives on Christmas Eve, but Santa always brought the biggest and the best, left unwrapped, next to the tree. So we had a plan. Stay up until Santa arrived, welcome him with cookies, and invite him to stay for a while and play with us and whatever great toys he brought.

Being only 5 years old, I conked out early, but not my brother. He was shaking me and calling “John, John!” I remember getting up and turning my new Santa Claus flashlight. When I pulled the string with the bell on it, his nose would light up red. (I knew about Rudolph, but I had to ask my mom about Santa’s red nose. She said that it had something to do with eggnog.)

Bobby whispered that he had heard Santa in the living room. We both creped down the hall to the louvered door and peeked through.

There sat, Santa and an elf, having the time of their lives playing with a brand new Lionel Train set, with lights, whistle and an entire miniature village.

Even though we had discovered that night who really brought the biggest and best toys, my brother and I never let on. In the following years we continued to act surprised on Christmas Day. We never again had to stay up all night. It was best to just leave “Santa” alone, having the time of his life.

O Lord, we really do not like mysteries because we really want to solve them so that we know what the truth is. We thank You for the Child of Bethlehem who grew up. Jesus taught His disciples saying, “I am the way, the truth and the life; no one comes to the Father but through me.” Help us to cling to Him as we continue on our spiritual journey this Advent. In Jesus’ name, we pray. Amen.