The Next Chapter in the Christ Story 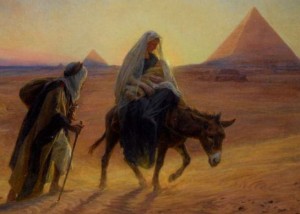 The telling of the Christmas story often ends with the joyful arrival of the Three Kings, and their worship of the Christ-child.  But the whole world is not always interested in bowing to the lordship of Christ. The story that follows the story of the Wise Men gives us a sad commentary on how some approach life.

Now after they had left, an angel of the Lord appeared to Joseph in a dream and said, “Get up, take the child and his mother, and flee to Egypt, and remain there until I tell you; for Herod is about to search for the child, to destroy him.” Then Joseph got up, took the child and his mother by night, and went to Egypt, and remained there until the death of Herod. This was to fulfill what had been spoken by the Lord through the prophet, “Out of Egypt I have called my son.”

When Herod saw that he had been tricked by the wise men, he was infuriated, and he sent and killed all the children in and around Bethlehem who were two years old or under, according to the time that he had learned from the wise men. Then was fulfilled what had been spoken through the prophet Jeremiah:

“A voice was heard in Ramah, wailing and loud lamentation, Rachel weeping for her children; she refused to be consoled, because they are no more.”

Rather than surrender their power, some people would rather eliminate the Christ.

What is our response to the presence of the God of Love in our world?

Do we embrace Jesus fully, and make Him Lord of our lives?

Or do we tend push Him aside, and try to dispose of Him before He calls us to live His life?

Let’s pick up the babe of Bethlehem and help Him to mature and grow in us.

Wonderful God, give us the power to do our best to keep Christ close in how we live our lives.  Amen