The Parable of the Rich Man 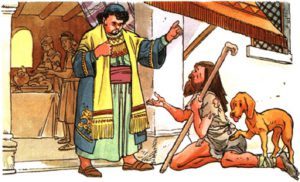 “The rich man looked out the window and saw a man named Lazarus lying on the ground. He had no money or food to eat. Sores covered his whole body. He was sick. Lazarus needed help. Instead of helping, the rich man shouted, ‘Be quiet you old beggar!’ … Later that day, Lazarus died right outside of the rich man’s house.”

In the comfort of the rich man’s home, it seemed that all was right with the world. But then his peace was disturbed by Lazarus crying out in pain and from hunger. He wanted his world to be peaceful again, so he told Lazarus to be quiet and he went back to sleep. The rich man could not put himself in Lazarus sandals, moccasins, or shoes. He could not imagine finding himself in Lazarus’ situation. Lazarus suffering continued until he breathed his last later that day and he immediately was whisked away to heaven.

Jesus told this story to His disciples to help them have their eyes and their ears open to people needing help and to realize that they could make a difference. Perhaps the best reminder is to always consider how we would feel if we were needing and asking for help.

Good Teacher, this is a story that makes us feel uncomfortable, when we look back on persons needing help whom we have passed by. This story is good when it inspires us to put ourselves in others’ shoes and to seize the opportunities when we can help. In Christ’s name, we pray. Amen.