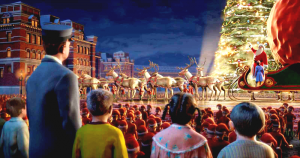 “A week later his disciples were again in the house, and Thomas was with them. Although the doors were shut, Jesus came and stood among them and said, ‘Peace be with you.’ Then he said to Thomas, ‘Put your finger here and see my hands. Reach out your hand and put it into my side. Do not doubt but believe. Thomas said, ‘My Lord and my God.’ Jesus said to him, ‘Have you believed because you have seen me? Blessed are those who have not seen and yet have come to believe. Now Jesus did many other signs in the presence of his disciples. But these are written so that you may believe that Jesus is the Messiah, the Son of God, and that through believing you may have life in his name.” John 20:26-31 (NRSV)

The Polar Express, a movie for children of all ages, is based on the premise that you have to BELIEVE. Several times the phrase, “seeing is believing” is used. The main character, a little boy, is struggling with wanting to believe in Santa Claus, but growing up and facing his own doubts. He makes the decision that he really does want to hop on board the Polar Express train that stops in front of his house on Christmas Eve to take him and other children to the North Pole to meet Santa. He is faced with adventures connected with some of the other children, and one mysterious adult, who he meets on board. His kindness toward them and willingness to stay the course, prove to be just what he needs to find the secret of the Christmas Spirit. He finds that even facing disappointment, the spirit of Christmas lies within his own heart, like a prayer, it’s there. That line, or something like it is in one of the songs. (Interesting side light: during a raucous runaway train episode, one of our antique German wooden men fell off of the speaker he was standing on. No harm, but it was like the toys coming to life while I watched! And hearing O Tannenbaum brought in the German part.)

Though the birth of our Lord was not mentioned in the movie, I did find some references, though subtle. One was in the song I mentioned, another was a distant scene of a town, that could be construed to look like our version of Bethlehem, and another was as the family was finishing their gift opening, and the mother said, “hurry up, we don’t want to be late”, as though they might be heading off to church. Human kindness and serving/helping each other was an important element of the movie, but the “doubting Thomas” aspect was also very evident. Though movies have not been an important part of my celebration of Christmas, I will enjoy watching this again in the coming years. I had never seen it before, and I cried in several scenes. The boy reminded me of my oldest grandson in many ways. Christmas is a wonderful feeling in our hearts, but we have to decide that we want to be a part of it.

O God, in our cynical world when we hear something described as being too good to be true, most people say it is. The abundant life You freely offer us seems too good to be true. You, who are forever faithful and true, bid us to believe not because we have seen, but because of who You are. Help us to hold fast to our belief in You and Your promises when so many things in our world challenge our convictions. In Jesus’ name, we pray. Amen.