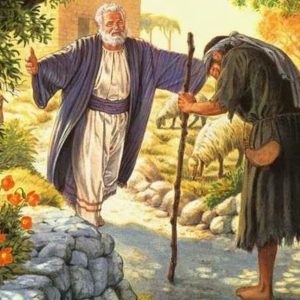 The Parable of the Prodigal Son makes most everybody’s Top-Ten List of the stories told by Jesus. The folks who sat down to create the Spark Story Bible for children included it in their New Testament stories. And they set the scene like this:

Jesus spent time with all sorts of people – even people who had done bad things. This made some people mad. “Why is Jesus always around people who do bad things?” they grumbled. Jesus heard them, so he told them this story.

It was the story we have often heard. There was a young son who walked away from his father, taking and wasting half of all that his father had. When times got bad, and he came to his senses, he came back home, hoping for love. (And he got more love than he had expected!) And, there was an older son, who stayed home all along, and was angry with his father when dad was so incredibly loving to the one whom the older son thought had done wrong.

We can often see ourselves embodied in both of the sons.

The Spark Story Bible editors sum the story up in these words:

The people understood. Jesus spend time with those people because even though they had done bad things, they might decide to change their lives and live like God wanted.

That’s a good goal for us, too.

Let Your love flow over me so that I love You and others more. Help me to live as Jesus taught and modeled, as I walk each day as one of His disciples. Amen.