The Proof of the Promise 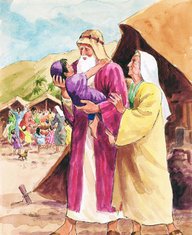 The Lord dealt with Sarah as he had said, and the Lord did for Sarah as he had promised. Sarah conceived and bore Abraham a son in his old age, at the time of which God had spoken to him. Abraham gave the name Isaac to his son whom Sarah bore him. And Abraham circumcised his son Isaac when he was eight days old, as God had commanded him. Abraham was a hundred years old when his son Isaac was born to him. Now Sarah said, “God has brought laughter for me; everyone who hears will laugh with me.” And she said, “Who would ever have said to Abraham that Sarah would nurse children? Yet I have borne him a son in his old age.” Genesis 21:1-7

What could bring the biggest smile to the faces of the old woman Sarah and her even older husband, Abraham? Their long wished for child. God had promised Abraham years before that one day Abraham would be the father of a great nation. And yet many years had passed, and Sarah had not given birth.

I wonder if Abraham and Sarah had doubted God’s ability to deliver on that promise? And when the promise, which had not come to fruition, was repeated to them from God’s own mouth, did they find comfort, or just more frustration? However they felt, they kept on listening, and wishing, and trusting.

Finally it happened. The Bible puts it this way:

The promise of God had proven to be true. Sarah smiled, laughing with joy. Abraham got busy with the details of circumcision and the like, and consented in naming the new boy Isaac (“Laughter”). The proof of God’s power was in delivering on the promise.

When I read in the pages of the scriptures, I find some of God’s promises. There are promises about protection, presence, and power. I need to keep reading, and then wishing and trusting that the proof of the promises will come to me in due time.

Help me to listen more closely, and to trust that You have the power to keep Your promises to me, in Jesus’s name. Amen.