The Same Old Same Old … And Something New 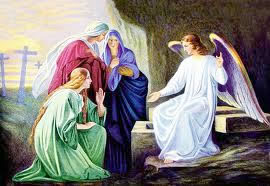 There’s a cynical view of life that makes us feel that things tend never to change. We all may have fallen into ruts, or gotten caught in a cycle of poor choices and even poorer consequences. The “same old same old” pattern makes us feel like giving up. And then, sometimes when we least expect it, the routine is broken and something new bursts on the scene.

That is what happened in the lives of Christ’s followers on that first resurrection day. On a Friday, the disciples and the women watched their Lord and Savior Jesus be nailed to a cross. He died a terrible death right before their very eyes. They spent the weekend (and the Jewish Sabbath) mourning, and when they were allowed, they went to the tomb to finish the process for a proper burial. No doubt they had been through this routine before. The death of a loved one was accompanied by the death of a dream and then a burial. But instead of the same old same old, they got something new.

Do not be alarmed (and angel of the Lord told them at the tomb) you are looking for Jesus of Nazareth, who was crucified. He has been raised; he is not here. (Mark 16:6)

Instead of a dead body, they were told of a risen Lord! Up to that point in their lives, death had always been the end. Now, it was just the beginning. Instead of the death of the dreams and promises of Jesus, his victory over death declared that all that he had said was true.

“He is not here ….. but he has risen” is the announcement that in Christ we are no longer destined to live in the vicious cycle of how things have been. We get to celebrate the new things that Jesus promises. It’s time to follow the new path.

God, help me to look beyond the same old sad outcomes, and to accept today the newness that You offer me in Lord and Savior Jesus. Amen.