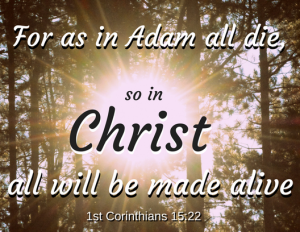 42 So it is with the resurrection of the dead. What is sown is perishable, what is raised is imperishable. 43 It is sown in dishonor, it is raised in glory. It is sown in weakness, it is raised in power. 44 It is sown a physical body, it is raised a spiritual body. If there is a physical body, there is also a spiritual body. 45 Thus it is written, “The first man, Adam, became a living being”; the last Adam became a life-giving spirit. 46 But it is not the spiritual that is first, but the physical, and then the spiritual. 47 The first man was from the earth, a man of dust; the second man is[j] from heaven. 48 As was the man of dust, so are those who are of the dust; and as is the man of heaven, so are those who are of heaven. 49 Just as we have borne the image of the man of dust, we will[k] also bear the image of the man of heaven.

When we read the Bible from Genesis to Revelation, we see that human beings started out in a Garden (Eden) and end up in a Heavenly Garden (with the 12 different fruit trees the banks of the river of living water.) Adam gets the blame for our expulsion form the first garden, and Jesus gets the credit for our inclusion in the second.

We don’t understand all the how, but we do give praise and glory to God for bringing us back home to live forever in the Heavenly Garden.

Thank You, God, for paving the way to the end of our journey in our heavenly home, through our Lord and Savior, Jesus, in whose name we pray. Amen.