The Start of a Life-Story 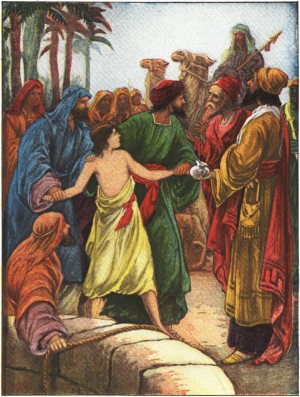 Jacob settled in the land where his father had lived as an alien, the land of Canaan. This is the story of the family of Jacob.

Joseph, being seventeen years old, was shepherding the flock with his brothers; he was a helper to the sons of Bilhah and Zilpah, his father’s wives; and Joseph brought a bad report of them to their father. Now Israel loved Joseph more than any other of his children, because he was the son of his old age; and he had made him a long robe with sleeves. But when his brothers saw that their father loved him more than all his brothers, they hated him, and could not speak peaceably to him.

Once Joseph had a dream, and when he told it to his brothers, they hated him even more. He said to them, “Listen to this dream that I dreamed. There we were, binding sheaves in the field. Suddenly my sheaf rose and stood upright; then your sheaves gathered around it, and bowed down to my sheaf.” His brothers said to him, “Are you indeed to reign over us? Are you indeed to have dominion over us?” So they hated him even more because of his dreams and his words.

Now his brothers went to pasture their father’s flock near Shechem. And Israel said to Joseph, “Are not your brothers pasturing the flock at Shechem? Come, I will send you to them.” He answered, “Here I am.” So he said to him, “Go now, see if it is well with your brothers and with the flock; and bring word back to me.” So he sent him from the valley of Hebron.

He came to Shechem, and a man found him wandering in the fields; the man asked him, “What are you seeking?” “I am seeking my brothers,” he said; “tell me, please, where they are pasturing the flock.” The man said, “They have gone away, for I heard them say, ‘Let us go to Dothan.’” So Joseph went after his brothers, and found them at Dothan. They saw him from a distance, and before he came near to them, they conspired to kill him. They said to one another, “Here comes this dreamer. Come now, let us kill him and throw him into one of the pits; then we shall say that a wild animal has devoured him, and we shall see what will become of his dreams.” But when Reuben heard it, he delivered him out of their hands, saying, “Let us not take his life.” Reuben said to them, “Shed no blood; throw him into this pit here in the wilderness, but lay no hand on him”—that he might rescue him out of their hand and restore him to his father. So when Joseph came to his brothers, they stripped him of his robe, the long robe with sleeves that he wore; and they took him and threw him into a pit. The pit was empty; there was no water in it.

Then they sat down to eat; and looking up they saw a caravan of Ishmaelites coming from Gilead, with their camels carrying gum, balm, and resin, on their way to carry it down to Egypt. Then Judah said to his brothers, “What profit is it if we kill our brother and conceal his blood? Come, let us sell him to the Ishmaelites, and not lay our hands on him, for he is our brother, our own flesh.” And his brothers agreed. When some Midianite traders passed by, they drew Joseph up, lifting him out of the pit, and sold him to the Ishmaelites for twenty pieces of silver. And they took Joseph to Egypt.

When Reuben returned to the pit and saw that Joseph was not in the pit, he tore his clothes. He returned to his brothers, and said, “The boy is gone; and I, where can I turn?” Then they took Joseph’s robe, slaughtered a goat, and dipped the robe in the blood. They had the long robe with sleeves taken to their father, and they said, “This we have found; see now whether it is your son’s robe or not.” He recognized it, and said, “It is my son’s robe! A wild animal has devoured him; Joseph is without doubt torn to pieces.” Then Jacob tore his garments, and put sackcloth on his loins, and mourned for his son many days. All his sons and all his daughters sought to comfort him; but he refused to be comforted, and said, “No, I shall go down to Sheol to my son, mourning.” Thus his father bewailed him. Meanwhile the Midianites had sold him in Egypt to Potiphar, one of Pharaoh’s officials, the captain of the guard. Genesis 37 NRSV

Of all the stories in the Old Testament, I think the story of Joseph the best. (Not that there isn’t great stuff in the Creation, the Flood and the Rainbow, The Exodus, Jonah and the Whale, and I could go on — but I seem to come back to the Joseph story again and again as my own life unfolds.) And I think to really appreciate the Joseph story, you have to read it over time.

The first installment in the story focuses on the teenage Joseph. He is the spoiled younger son/brother in the family. He seems to be dad’s favorite (and maybe even God’s favorite.) He’s not mature enough to keep his mouth closed as he tells on his brothers, and shares a dream that doesn’t put the rest of the family in a good mood. And he suffers the consequences of sibling rivalry. The story also touches on the thoughts of various brothers, and the grief of a father when an apparent tragedy strikes.

I am often drawn to this story because it has seemed to speak to me on a personal level at different times in my life. As verse 2 indicates, this is a story of a family. As this story starts, I can find myself asking myself about the details of my own life. Where do I fit into my family? What are my dreams? How do others around me choose to deal with me? Can I see my life as a drama and story where God and others are active players?

God, help me to take a little time to reflect on my life and where You and others fit in. Remind me of my dreams, my challenges, and Your gracious presence, as this next day in my life of following you unfolds. Amen.