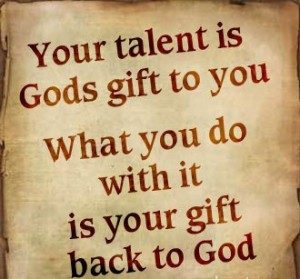 Upon reading this passage, most people I would suspect think of a talent as a coin. A talent was actually a weight and its value was determined by what the talent was made of, namely, copper, gold or silver. A silver talent was most common and it would be worth around $347. So even one talent was no small amount!

Jesus tells this parable of a man going on a journey who entrusts his property to three slaves. To one he gives five talents, to another two talents and to the last slave one talent. The first slave traded his five talents and made five talents more. The second slave was like the first in that he made two more talents from the two talents he was given. The one who was given the one talent did nothing except dig a hole and bury the talent. The man returns from his trip and he wants to settle the accounts. He is quite pleased with both the slaves who doubled the amount they had been given. In light of their savvy business dealing and profitable risk taking, the master commends them and gives them more. They have proven to use their talents wisely.

Then the one slave to whom one talent was given is called to give an accounting. He says, “Master, I knew that you were a harsh man, reaping where you did not sow and gathering where you did not sow seed. So I was afraid and I went and hid your talent in the ground. Here you have what is yours!” This slave had already injured his master by failing even to invest the money with a banker so that it might accrue some interest. To this injury, the slave also insulted his master by suggesting that he expected them to do all the work and take all the profit. The master then confiscates the single talent and gives it to the slave with ten talents. “To all those who have, more will be given; but from those who have nothing, even what they have will be taken away. The master then orders the worthless slave to be thrown into the outer darkness.

The master is representative of God and the slaves are representative of us. God has given us talents (not coins or weights) but abilities, gifts, skills and talents in varying amounts. God knows us completely. God knows what we are capable of doing. God has realistic expectations of us, namely that we will use our talents as best we can. Like the slaves in this parable, we too will be called to give an accounting of how we have used the talents God has given to us. Will we be like the two slaves who doubled the gifts they were given or will we be like the one who hid his talent and never used it? The parable suggests that God appreciates His people using the talent(s) He has given them rather than simply doing nothing. As the old adage states: “Nothing ventured, nothing gained.” To the slave with five and two talents respectively, the master said, “Well, done good and trustworthy slave; you have been trustworthy in a few things, I will put you in charge of many things. Enter into the joy of your master.” Question for the day: What will God say to you about how you have used the talents He entrusted to you?

O God, we may not have been given the five talents or the two talents. We may have been given only one. Help us to use the talent(s) You have given us so that You are pleased and we may hear that wonderful commendation: “Well, done good and trustworthy slave; you have been trustworthy in a few things, I will put you in charge of many things. Enter into the joy of your master.” In Christ’s name, we pray. Amen.