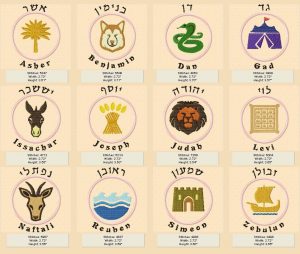 All these are the twelve tribes of Israel, and this is what their father said to them, blessing each one with a suitable blessing.
Genesis 49:28

Not long ago I received a summons for jury duty and was asked to appear at the Polk County Courthouse on Monday, February 12 (Abraham Lincoln’s birthday). For the first case I was not selected as a juror, but I was for the second case. I usually thought twelve jurors were selected, but I was chosen to serve on a jury of seven for a trial to be held on Friday, February 16. Witnesses failed to appear, the trial did not proceed and we were excused from service. I later learned that the number of jurors varies, but in criminal cases involving serious felonies there are usually twelve jurors. And there were twelve tribes of Israel.

The patriarchs are Abraham, Isaac, and Jacob, who was later named Israel. Jacob had twelve sons and these sons became the tribal heads over regions of the Promised Land. In Genesis 49 we find a poem that speaks of characteristics of these sons and of the regions they would oversee. Jacob, or Israel, is on his deathbed and he pronounces blessings on his sons and speaks of what the future holds for them. Presumably, if you were a child of one of those sons then you belonged to that son’s tribe. You were one of his descendants.

Today there is great interest in genealogy as people research their family trees. God made us for life in community and it is wonderful as we see photographs of four or five generations, for example a great, great grandparent and a child.

Blessed Lord, we thank You for ordaining that we should enjoy life in community. We thank You when Your young children have been able to see and interact with family members of previous generations. We thank You that we can envision the family names continuing and anticipating future generations to treasure the stories and traditions that have been handed down from one generation to another. In Christ’s name, we pray. Amen.