The Unknown Boy Celebrated for Having Shared 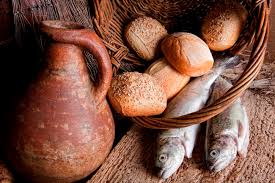 There is a boy here who has five barley loaves and two fish.” But what are they among so many people
John 6:9

The story of the miraculous feeding of the five thousand is recorded in the Gospels of Matthew, Mark, Luke, and John. All attest that the amounts of food available to feed the hungry crowd of five thousand were five barley loaves and two fish. All question what this small amount could do to provide some food for all those people, much less satisfy their hunger.

In the Gospel of John alone, we are told that the one who had made preparations, should he become hungry, was a boy. He had brought with him a small lunch of five barley loaves and two fish. The disciple, Andrew was the one who made the discovery, who informed Jesus of the quantity of food found, who must have introduced the boy to Jesus and who may have asked him if he would be willing to share his food.

What is obvious to all is that little is much when it is entrusted to God, who can bless it so that it does more than we could ever imagine. Three Cents a Meal offerings add up so that people here, in Wimauma, and in Honduras are fed. People link arms to form a human chain to rescue people caught in a rip current. Children’s simple prayers overheard by adults, can touch their hearts by the trust the children exhibit. Little is much when we entrust what we have to God’s hands!

Lord Jesus, like the woman who anointed Your feet and dried them with her hair, so this unknown boy too is remembered for what he did, wherever the Gospel is proclaimed. Help us to entrust ourselves and our gifts to Your hands so that by Your grace great things may be accomplished. Amen.