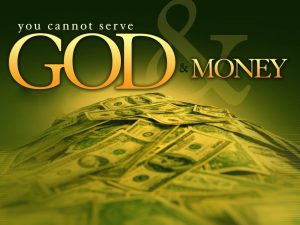 Just when you thought the wicked would receive their “just desserts” Jesus tells this parable about The Unrighteous Steward. It is not what we were expecting!

A rich man had a manager and it came to the rich man’s attention that the manager was squandering his property. The rich man summoned the manager and demanded that he address these allegations. He was to give an accounting of his management and informed that he would be receiving his pink slip. He was done, he was finished, he was out!

The manager said to himself, “What will I do, now that my master is taking the position away from me? I am not strong enough to dig and I am ashamed to beg.” He may not be able to get the upper hand with the rich man, but he shrewdly knows of a way to ingratiate himself to the rich man’s debtors. The former manager is going to juggle the books so that the debtors will owe less to the rich man and that they will show their appreciation to the manager by welcoming him into their homes.

He summons the master’s debtors one by one. One owed his master 100 jugs of olive oil and he was instructed to change the bill to 50. Another owed his master 100 containers of wheat and he was instructed to change the bill to 80. The manager has already squandered his master’s property and he devises a way to cheat him even more while “feathering his own nest.” His plan becomes known to the master. And here is the surprise! The master commends the dishonest manager because he has acted shrewdly. It is hard for us to believe that the rich man is not furious with the manager as he once again has profited at his master’s expense. The master is stunned that the manager has found a way to provide for himself in the future. The master does not admire his dishonesty, but he is amazed that he has found a solution to his predicament.

Jesus concludes this parable with these words: “No slave can serve two masters; for a slave will either hate one and love the other, or be devoted to the one and serve the other. You cannot serve God and wealth.” Money was of the greatest concern to the manager and he would pursue wealth no matter what. While it takes money for us to live, it is not to be that which is of greatest importance in our lives. We are to love God and be devoted to Him alone.

O Lord, help us to be righteous stewards. Help us to make money to provide for our needs and to share with others. Guard us from loving money and from dishonest ways of acquiring it. Help us to love You alone with all our heart, soul, mind, and strength. In Jesus’ name, we pray. Amen.