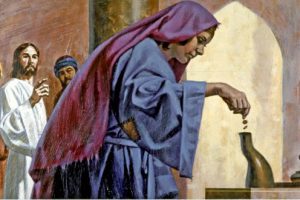 Today’s story from the Spark Bible is: The Widow’s Offering. Jesus is outside the temple teaching the disciples about sharing. Into the temple struts a very wealthy man and the reason we know he is so rich is by his fancy robes. As the disciples gazed at him, and as he noticed he was being observed, he conceded, “I must be very special.” He then pulled out his purse and slowly removed the large bright coins so observers could count and note their value. Then, he put them in the moneybox. It was clear that he had made a sizeable offering that day!

“Jesus asked, ‘Do you see that poor old widow?’ Jesus whispered the question because he did not want to scare her. She looked this way and that. She tried to hide in the crowd. She bent over the moneybox, “Clink. Clink.” Her two tiny coins barely made a sound as she dropped them in. The old woman reached her hand into her pocket. It was empty. Quietly the poor woman shuffled away”.

“‘Did you notice?’ asked Jesus. ‘The man in fancy robes gave just a little of his riches and showed off a lot. The widow gave the only two coins she had and kept quiet about it. She shared everything. She is the one who gave the most. This is how I want you to share.’”

O God, let it be enough for us that You know what we give. Steer us away from giving that draws attention to ourselves or to our gifts. Help us to share showing that we have learned valuable lessons from the Widow’s Offering. In Jesus’ name, we pray. Amen.