The Woman: Exhausted By Medical Opinions With No Healing 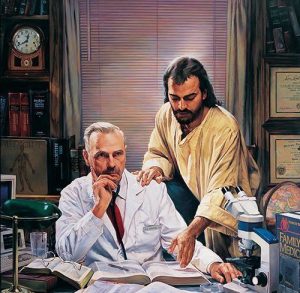 But the woman knowing what had happened to her came in fear and trembling, fell down before Him, and told Him the whole truth.
Mark 5:33

As many of you know I was burned in a kitchen accident in my young childhood. I was taken to a Dr. Berkley in Charlotte, N.C., for examination and consultation. He recommended some skin grafts and proceeded to explain the surgery in detail … terrifying me to death! As I grew older I wanted to explore the medical opinions available for some corrective surgery, but not with Dr. Berkley! I consulted a doctor at Bowman Gray in Winston-Salem, but he advised doing nothing. I then consulted a surgeon at Duke and he said that the procedure could be done and he would turn the case over to a resident, but he was the one who came highly recommended. Having read about a celebrated physician, Dr. Stallings, in Iowa I consulted him and was told several procedures could be done. I contacted another physician in High Point, N.C., and he advised against doing anything. Finally, I consulted with a physician, Dr. Russell Kitchens in Greensboro, N.C., who could do the surgeries and I could be an out-patient. Excluding Dr. Berkley, there were three in favor and two against. I chose Dr. Kitchens to do the surgeries and I was quite pleased with the results.

These days with escalating medical costs, insurance and difficulties in scheduling appointments with doctors for “second” opinions is not easy. In today’s lesson the woman was weary from having seen doctors for twelve years and having spent all that she had without being healed of her hemorrhages. She was desperate and she no doubt had heard of Jesus and His miraculous cures of diseases and sicknesses. When He was within her arm’s reach of touching His garments, she just had to try in the hope that she would finally be healed and made whole. No one would ever know or so she thought! Upon touching Jesus’ clothes the hemorrhages ceased and she felt to the core of her being that she was healed and had been made whole. The Lord felt that “healing power” had gone out from His body and He wanted to know who had touched Him in the midst of that crowd.

Her anonymous act had thrust her into the spotlight as she was forced to confess what she had done. “But the woman knowing what had happened to her came in fear and trembling, fell down before Him, and told Him the whole truth.” Jesus said to her, “Daughter, your faith has made you well; go in peace and be healed of your disease.” She was a witness to Jesus’ healing power and she no longer had to hide. She was healed and she could testify to this marvelous deed Jesus had done.

O Lord, You are the Great Physician, who heals us of our diseases and binds up our wounds. We thank You for endowing doctors and nurses with the healing arts so that they may minister to the hurting in Your name. When health is restored, help us to be grateful. When improvement is slow, help us to be patient. When recovery is not forthcoming, grant us Your peace. In Christ’s name, we pray. Amen.