There Are Neighbors And Then There Are Good Neighbors 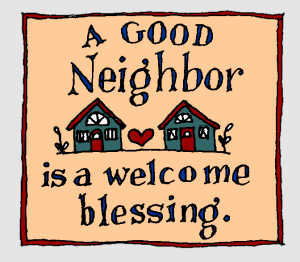 [Jesus said] “Which of these three, do you think, was a neighbor to the man who fell into the hands of robbers? He [the lawyer] said, ‘The one who showed him mercy.’ Jesus said to him, ‘Go and do likewise.’”
Luke10:36-37

When the third neighbor came along, he felt compassion and pity for the man wounded, bleeding and quite frankly dying on the hot, dusty road from Jerusalem to Jericho. He came to the victim, poured oil and wine on his wounds. He bandaged them and then lifted the man up to ride on his own animal. He took his “neighbor” to an inn and cared for him throughout the night. The next day the man paid the innkeeper a sum to continue caring for the man and he promised to repay him whatever he spent in nursing him back to health upon his return. This foreigner, this man from Samaria, proved to be the good neighbor to the wounded man.

Jesus then asks the lawyer, whose question initiated Jesus telling this story, a question. Jesus asks, “Which of these three, do you think, was a neighbor to the man who fell into the hands of robbers?” The lawyer answers, “The one who showed him mercy.” Jesus tells the lawyer, “Go and do likewise.”

Obviously with this broadened definition of “neighbor,” you and I cannot minister to all with who we are in close proximity and needing assistance. Like the boy who flung starfish back into the sea, we can make a difference to this one and to that one, to the one over here and the one over there. We can show compassion to some and make a difference in their lives. Worthy of our reflection is the question: Am I being a neighbor more than I am being a good neighbor? We can’t leave it all up to State Farm. (“Like a good neighbor State Farm is there!”)

Blessed Lord, we have been the “neighbors” in need and we have known how much it means to have “good neighbors.” Keep us mindful that neighbors can be strangers and that neighbors are more than those who live right around us. Guard us from being the ones who always receive and often fail to give of ourselves. Help us to be “good neighbors!” In Christ’s name, we pray. Amen.