This Week’s Devotions Will Be Based on Acts 27 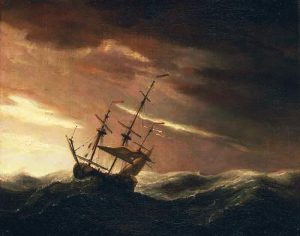 It was decided that we would sail for Italy. Paul and some other prisoners were handed over to a Roman commander named Julius. He belonged to the Imperial Guard. We boarded a ship from Adramyttium. It was about to sail for ports along the coast of Asia Minor. We headed out to sea. Aristarchus was with us. He was a Macedonian from Thessalonica.

The next day we landed at Sidon. There Julius was kind to Paul. He let Paul visit his friends so they could give him what he needed. From there we headed out to sea again. We passed the calmer side of Cyprus because the winds were against us. We sailed across the open sea off the coast of Cilicia and Pamphylia. Then we landed at Myra in Lycia. There the commander found a ship from Alexandria sailing for Italy. He put us on board. We moved along slowly for many days. We had trouble getting to Cnidus. The wind did not let us stay on course. So we passed the calmer side of Crete, opposite Salmone. It was not easy to sail along the coast. Then we came to a place called Fair Havens. It was near the town of Lasea.

A lot of time had passed. Sailing had already become dangerous. By now it was after the Day of Atonement, a day of fasting. So Paul gave them a warning. “Men,” he said, “I can see that our trip is going to be dangerous. The ship and everything in it will be lost. Our own lives will be in danger also.” But the commander didn’t listen to what Paul said. Instead, he followed the advice of the pilot and the ship’s owner. The harbor wasn’t a good place for ships to stay during winter. So most of the people decided we should sail on. They hoped we would reach Phoenix. They wanted to spend the winter there. Phoenix was a harbor in Crete. It faced both southwest and northwest.

A gentle south wind began to blow. The ship’s crew thought they saw their chance to leave safely. So they pulled up the anchor and sailed along the shore of Crete. Before very long, a wind blew down from the island. It had the force of a hurricane. It was called the Northeaster. The ship was caught by the storm. We could not keep it sailing into the wind. So we gave up and were driven along by the wind. We passed the calmer side of a small island called Cauda. We almost lost the lifeboat that was tied to the side of the ship. So the men lifted the lifeboat on board. Then they tied ropes under the ship itself to hold it together. They were afraid it would get stuck on the sandbars of Syrtis. So they lowered the sea anchor and let the ship be driven along. We took a very bad beating from the storm. The next day the crew began to throw the ship’s contents overboard. On the third day, they even threw the ship’s tools and supplies overboard with their own hands. The sun and stars didn’t appear for many days. The storm was terrible. So we gave up all hope of being saved.

The men had not eaten for a long time. Paul stood up in front of them. “Men,” he said, “you should have taken my advice not to sail from Crete. Then you would have avoided this harm and loss. Now I beg you to be brave. Not one of you will die. Only the ship will be destroyed. I belong to God and serve him. Last night his angel stood beside me. The angel said, ‘Do not be afraid, Paul. You must go on trial in front of Caesar. God has shown his grace by sparing the lives of all those sailing with you.’ Men, continue to be brave. I have faith in God. It will happen just as he told me. But we must run the ship onto the beach of some island.”

On the 14th night the wind was still pushing us across the Adriatic Sea. About midnight the sailors had a feeling that they were approaching land. They measured how deep the water was. They found that it was 120 feet deep. A short time later they measured the water again. This time it was 90 feet deep. They were afraid we would crash against the rocks. So they dropped four anchors from the back of the ship. They prayed that daylight would come. The sailors wanted to escape from the ship. So they let the lifeboat down into the sea. They pretended they were going to lower some anchors from the front of the ship. But Paul spoke to the commander and the soldiers. “These men must stay with the ship,” he said. “If they don’t, you can’t be saved.” So the soldiers cut the ropes that held the lifeboat. They let it drift away.

Just before dawn Paul tried to get them all to eat. “For the last 14 days,” he said, “you have wondered what would happen. You have gone without food. You haven’t eaten anything. Now I am asking you to eat some food. You need it to live. Not one of you will lose a single hair from your head.” After Paul said this, he took some bread and gave thanks to God. He did this where they all could see him. Then he broke it and began to eat. All of them were filled with hope. So they ate some food. There were 276 of us on board. They ate as much as they wanted. They needed to make the ship lighter. So they threw the rest of the grain into the sea.

When daylight came, they saw a bay with a sandy beach. They didn’t recognize the place. But they decided to run the ship onto the beach if they could. So they cut the anchors loose and left them in the sea. At the same time, they untied the ropes that held the rudders. They lifted the sail at the front of the ship to the wind. Then they headed for the beach. But the ship hit a sandbar. So the front of it got stuck and wouldn’t move. The back of the ship was broken to pieces by the pounding of the waves.

The soldiers planned to kill the prisoners. They wanted to keep them from swimming away and escaping. But the commander wanted to save Paul’s life. So he kept the soldiers from carrying out their plan. He ordered those who could swim to jump overboard first and swim to land. The rest were supposed to get there on boards or other pieces of the ship. That is how everyone reached land safely.