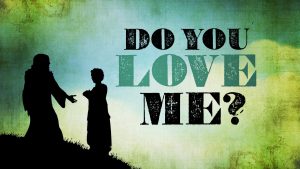 I have always felt bad for the part that Peter played in the story of the death of Jesus. Where many of the other disciples abandoned Jesus in the garden, Peter followed his Lord all the way to the place of the trial. It was there, though, that just as Jesus had predicted (Matthew 26:69-75), Peter denied three times even knowing Jesus. Then Jesus died on the cross.

I have always felt bad that Peter, a great person of faith, had to live with the three-fold string of denial. But Jesus didn’t leave him there. After Jesus was raised from the dead, he gave Peter a second chance (three times over) to affirm his faith in his Lord and Savior.

I am happy that Jesus gave Peter such an incredible opportunity. And I am hopeful that when I deny my Lord, in my words or my actions, Jesus is as gracious with me.

God, when my faith is strong, let my words and actions give witness to all that You have done for me in Jesus. And when my faith is weak, give me another chance to live as a faithful disciples of my Lord and Savior, Jesus, in whose name I pray. Amen.