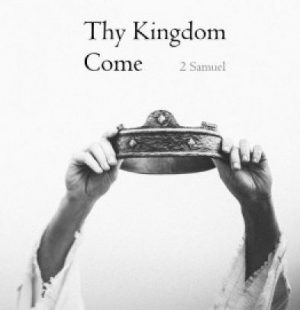 Our Father who art in heaven, hallowed be thy name. Thy kingdom come, thy will be done, on earth as it is in heaven. Give us this day our daily bread; and forgive us our debts, as we forgive our debtors; and lead us not into temptation, but deliver us from evil. For thine is the kingdom and the power and the glory, forever. Amen.
Presbyterian Hymnal (pg. 16)

“Thy kingdom come” is the second of three petitions that address God in the Lord’s Prayer. In this petition we, as supplicants, are asking God to fulfill His kingdom … to usher it in now.

Consider for a moment that you have been transported back in time to that day as Jesus was addressing would-be disciples in this Sermon on the Mount. It is a beautiful day on that hillside as you listen to Jesus’ instructions as to how we should pray. He then comes to this petition, “Thy kingdom come” and then from your vantage point it does not seem pertinent. The sun is shining, white clouds are floating in the blue sky and palm trees are swaying in the breeze. It seems that God is in His heaven and all is right with the world. But then as the retreat is over and you return to the world … the cities, towns and villages of Galilee and Judea … it is as if those words do address current situations.

Perhaps there have been skirmishes between Romans and Jews so that some believers have been imprisoned while others wounded or killed because of disturbing the peace and disobeying Roman laws. Families may be grieving the loss of loved ones. Others may be maintaining a bedside vigil with loved ones who are injured and sick. Around the corners and down the streets the poor can be found … some hungry, some naked and some needing shelter. And then there are those who are marginalized by society … the blind, the deaf, the lame, those afflicted with mental illnesses, and those who are social outcasts. They would be numbered among those praying for God’s kingdom to come … where there is no more pain, death, and tears.

Now let’s fast forward through two thousand years recalling the petitions for God’s kingdom to come by martyrs during the persecution of Christians … by those who fell during the Inquisition and the Crusades … and by those who suffered deprivation, destruction, disease and death through wars not the least of which were the American Revolution, the Civil War, World War I, World War II, the Korean War, the Viet Nam War, and the numerous wars that continue throughout the Mid East. In addition to the wars, there have been so many instances of man’s inhumanity to man throughout the years. The petition continues to arise: “Thy kingdom come.” We long for the time-to-come, when death, pain, and tears will be no more, and God’s kingdom will be fulfilled.

Blessed Jesus, we thank You for teaching us to pray “Thy kingdom come.” We admit that we can only imagine what life in the kingdom will be like, but knowing You as Our Father, we don’t doubt that it will be even more beautiful, joyful and peaceful for those who have been and will be welcomed to it. In Christ’s name, we pray. Amen.