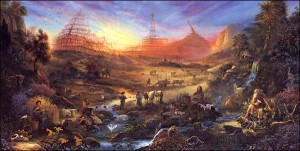 The Lord then said to Noah, “Go into the ark, you and your whole family, because I have found you righteous in this generation. Take with you seven pairs of every kind of clean animal, a male and its mate, and one pair of every kind of unclean animal, a male and its mate, and also seven pairs of every kind of bird, male and female, to keep their various kinds alive throughout the earth. Seven days from now I will send rain on the earth for forty days and forty nights, and I will wipe from the face of the earth every living creature I have made.”

And Noah did all that the Lord commanded him. Genesis 7:1-5

I’ve always been extremely impressed with Noah. He was considered a righteous man and honestly he must have been a pretty crafty guy as well. Building an ark isn’t a task most of us would be willing to take on but Noah got out his hammers and nails and began. When I think of Noah, I think of a man of faith. What faith he had to gather his family and living creatures and hop aboard this huge boat. Would the boat sink? What was going to happen during these 40 days and 40 nights? What would happen at the end of the 40 days and 40 nights? What was God’s overall plan? Were he and his family up to this task/adventure? The questions had to be endless but Noah stepped out in faith and wonderful things happened. The human race was restored and God promised never to flood the earth again.

Have you ever experienced 40 days and 40 nights of doubts, fears, anxieties, and/or sickness? The hard times do tend to come into our lives but “The empty tomb demonstrates once and for all that God’s plans will never end up stuck in the mud. No matter how high the waters rise, you can trust your Lord to lead you to dry ground.” Praise the Lord for the empty tomb and praise the Lord for the ability to walk in faith.

Father of Faith – You lead us through the storms of life, just as You led Noah through the flood. We are so blessed and thankful for Your unconditional love and support. Thank You for being with us when we can’t see the light. In Jesus’ name we pray. Amen.