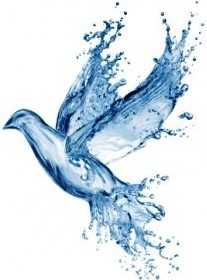 The Acts of the Apostles has also been called the story of “the Church in the Power of the Spirit. You can almost lose count of the references to the Holy Spirit in this 28-chapter-long book of the early church. The same might be said of stories of baptism. Here in chapter nineteen we have another baptismal account (or you might say twelve if you are keeping track of baptisms.)

While Apollos was in Corinth, Paul passed through the interior regions and came to Ephesus, where he found some disciples. He said to them, “Did you receive the Holy Spirit when you became believers?” They replied, “No, we have not even heard that there is a Holy Spirit.” Then he said, “Into what then were you baptized?” They answered, “Into John’s baptism.” Paul said, “John baptized with the baptism of repentance, telling the people to believe in the one who was to come after him, that is, in Jesus.” On hearing this, they were baptized in the name of the Lord Jesus. When Paul had laid his hands on them, the Holy Spirit came upon them, and they spoke in tongues and prophesied – altogether there were about twelve of them. Acts 19:1-7

In this story, there were some hold-overs from the days of John the Baptist, who had received baptism and viewed it as a sign of repentance and obedience to God. This is a good starting point in our understanding of baptism in our faith. But then Paul talked to them in more depth, and told them how baptism points the way to Jesus. As these twelve wanted a deeper experience, Paul baptized them in the name of Jesus, and the Holy Spirit got into the act. Like on Pentecost, these believers, in the power of the Spirit, then spoke in tongues and prophesied.

The Holy Spirit seems to empower the people as it will.

As the baptized, are you and I obedient and repentant? As the baptized, are we ready to be empowered for ministry and service in the name of the Lord who claims us? Let’s make sure that our life is one more story of a person in the power of the Spirit.

Make me into and obedient servant of Yours, Dear God. Empower me with your Spirit as you guide me in the way of my Lord and Savior, Jesus, in whose name I pray. Amen.