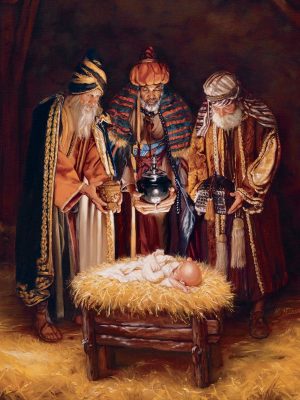 The Twelve Days of Christmas Carols

Christmastide Reflections on Songs of the Season

It is January 6, Epiphany Day. The Twelfth Day of Christmas has come, and in some corners of Christendom we celebrate the arrival of the Wise Men. Even a quick reading of the story of the birth of Christ in the Gospel According to Matthew and the Gospel According to Luke will reveal that the three visitors from the East didn’t begin their long journey until the night of the birth of Christ when the star appeared. With their inquisitive stopover in Jerusalem to ask about the birth of the new King of the Jews added to their travel plans, days, weeks, or months may have passed before the Magi or Kings arrived at the house where Mary and the babe were. But, in due time they did come, and they bowed down and offered gifts to the newborn king.

In the time of King Herod, after Jesus was born in Bethlehem of Judea, wise men from the East came to Jerusalem, asking, “Where is the child who has been born king of the Jews? For we observed his star at its rising, and have come to pay him homage.” When King Herod heard this, he was frightened, and all Jerusalem with him; and calling together all the chief priests and scribes of the people, he inquired of them where the Messiah was to be born. They told him, “In Bethlehem of Judea; for so it has been written by the prophet: ‘And you, Bethlehem, in the land of Judah, are by no means least among the rulers of Judah; for from you shall come a ruler
who is to shepherd my people Israel.’”

Then Herod secretly called for the wise men and learned from them the exact time when the star had appeared. Then he sent them to Bethlehem, saying, “Go and search diligently for the child; and when you have found him, bring me word so that I may also go and pay him homage.” When they had heard the king, they set out; and there, ahead of them, went the star that they had seen at its rising, until it stopped over the place where the child was. When they saw that the star had stopped, they were overwhelmed with joy. On entering the house, they saw the child with Mary his mother; and they knelt down and paid him homage. Then, opening their treasure chests, they offered him gifts of gold, frankincense, and myrrh.
Matthew 2:1-12

The story wouldn’t be complete without these royal visitors and their worship of the babe. And for many Christians, the season isn’t complete until we sing of their arrival:

We three kings of Orient are; bearing gifts we traverse afar,
field and fountain, moor and mountain, following yonder star.

Born a King on Bethlehem’s plain, gold I bring to crown him again,
King forever, ceasing never over us all to reign. [Refrain]

Frankincense to offer have I; incense owns a deity nigh;
prayer and praising gladly raising, worshiping God Most High. [Refrain]

Myrrh is mine; its bitter perfume breathes a life of gathering gloom;
sorrowing, sighing, bleeding, dying, sealed in the stone-cold tomb. [Refrain]

Glorious now behold him arise, King and God and Sacrifice:
Alleluia! Alleluia! sounds through the earth and skies. [Refrain]

Wonderful God, let me be led this year by the star of wonder, star of night, star of royal beauty bright, that I may too truly come regularly to worship the Christ child. Thank You for guiding me once again this Christmas season to Your Perfect Light, in whose name I pray. Amen.