What Goes Around Comes Around?! 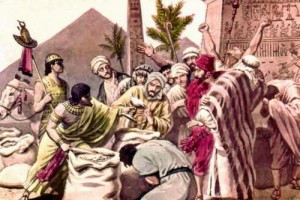 “They said to one another, ‘Alas, we are paying the penalty for what we did to our brother; we saw his anguish when he pleaded with us, but we would not listen. That is why this anguish has come upon us.’ Then Reuben answered them, ‘Did I not tell you not to wrong the boy? But you would not listen. So now there comes a reckoning for his blood.’ ” Genesis 42:21-22 (NRSV)

Had there been one day since that day when he was thrown into the pit by his brothers and then sold to the Ishmaelites that Joseph had not thought about what they had done to him?

Had there been one day since that day when they threw Joseph into the pit, sold him to the Ishmaelites, and brought such great sorrow on their father Jacob that Joseph’s brothers had not reflected upon … been haunted by their despicable actions?

Famine had reached Canaan and so Jacob sent all of his sons, except Benjamin, the runner-up in his father’s favoritism, to Egypt to purchase grain. Joseph is now the governor and is in charge of the distribution of grain. Now Joseph has a playful opportunity to exact some revenge on his brothers for the misery that they had heaped upon him. The brothers faced the challenge of dealing with their guilt, which they had suppressed for all these years. “What goes around, come around!”

His brothers come to him wanting to buy grain. Joseph recognizes them and accuses them of espionage, but they do not recognize him and affirm that they are only members of a family living in Canaan who have come to buy food.

Joseph does not believe them and he demands that one will go home and return with Benjamin while the others remain in Egypt. Only when Benjamin comes to Egypt will Joseph believe their story. Joseph has them imprisoned for three days and then he relented in his demand by allowing one brother to remain behind while the others returned to Canaan to bring Benjamin with them so that Joseph would believe that they were not spies. After being presented with this proposition, they engage in the dialogue that serves as our text today. Simeon is chosen by Joseph to remain behind while his brothers take their allotment of grain home.

On the way home one of the brothers opens a sack of grain only to find the money used to buy it hidden in the sack. The same was true of every brother’s sack of grain. No doubt Joseph ordered that this be done. “What goes around, comes around?!” Joseph was concerned about the welfare of his family. We also may safely assume that he was concerned for Simeon who received good care, even though imprisoned. When we like Joseph find ourselves caught in that vicious circle, we can follow his example of stopping the cycle that “comes around” by doing good to those who mistreat us. Jesus taught us how to break that cycle, “In everything do to others as you would have them do to you.” Matthew 7:12

Merciful God, when we find ourselves snared in the cycle of “what goes around comes around,” help us to be agents for the good. When we have been mistreated remind us always of the Golden Rule. In Jesus’ name, we pray. Amen.