What Star Is This, with Beams So Bright ~ Hymn 152 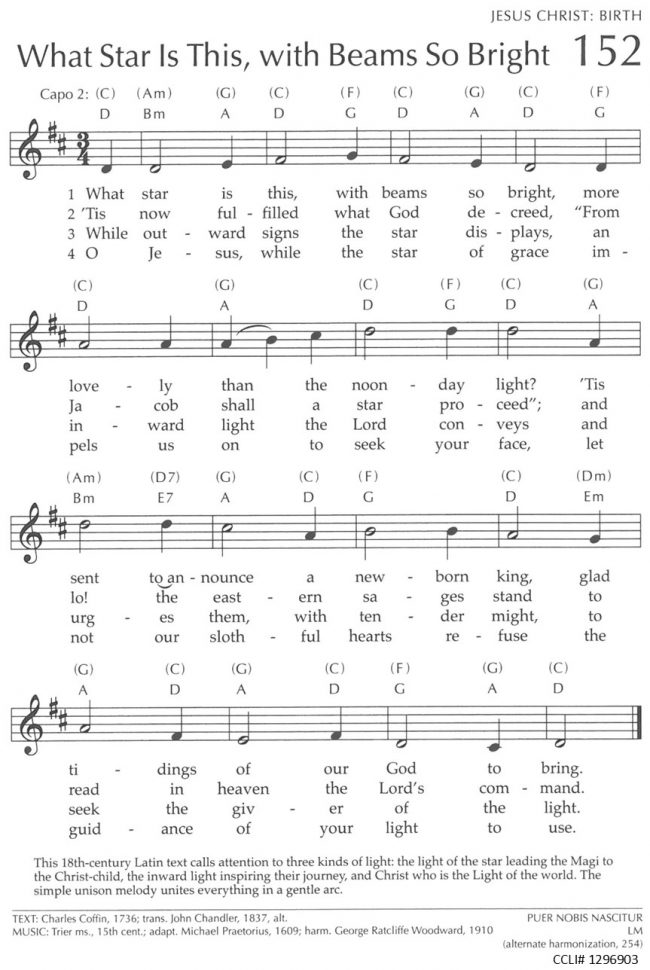 In the time of King Herod, after Jesus was born in Bethlehem of Judea, wise men from the East came to Jerusalem, asking, “Where is the child who has been born king of the Jews? For we observed his star at its rising and have come to pay him homage.” When King Herod heard this, he was frightened, and all Jerusalem with him; and calling together all the chief priests and scribes of the people, he inquired of them where the Messiah was to be born. They told him, “In Bethlehem of Judea; for so it has been written by the prophet: ‘And you, Bethlehem, in the land of Judah, are by no means least among the rulers of Judah; for from you shall come a ruler  who is to shepherd my people Israel.’ Then Herod secretly called for the wise men and learned from them the exact time when the star had appeared.   Then he sent them to Bethlehem, saying, “Go and search diligently for the child; and when you have found him, bring me word so that I may also go and pay him homage.”  When they had heard the king, they set out; and there, ahead of them, went the star that they had seen at its rising, until it stopped over the place where the child was.  When they saw that the star had stopped, they were overwhelmed with joy. On entering the house, they saw the child with Mary his mother; and they knelt down and paid him homage. Then, opening their treasure chests, they offered him gifts of gold, frankincense, and myrrh. And having been warned in a dream not to return to Herod, they left for their own country by another road.

There has been great speculation as to the nature of the star that captured the Wise Men’s attention. They observed the star at its rising and had come to pay homage to the one born King of the Jews. The star “stopped” over the place where the child was. The Wise Men were overwhelmed with joy. It had been a long journey and they were thrilled to have discovered that for which they had been seeking.

While we do not know the exact nature of the star, we can make some assumptions. The star must have been exceptionally beautiful and brilliant. The star may have bee considerably larger than other stars in the skies. Some believe that the star may have actually been a comet. Whatever it was, the star drew the attention of the Wise Men and they followed it until it led them to the house where the child was with Mary, his mother.

Matthew 2:1-12 is alluded to in the first stanza of the hymn:

What star is this, with beams so bright, more lovely than the noonday light? Tis sent to announce a newborn King, glad tidings of our God to bring.” This 18th century Latin text calls attention to three kinds of light: the light of the star leading the Magi to the Christ child, the inward light inspiring the journey, and Christ, who is the Light of the World. The simple unison melody unites everything in a gentle arc.

Light of the World, we humble ask You to keep that inward light shining in our lives so that we may faithfully and joyfully follow wherever You lead. In Christ’s name, we pray. Amen.