What You Need – I AM: The Way, the Truth, and the Life 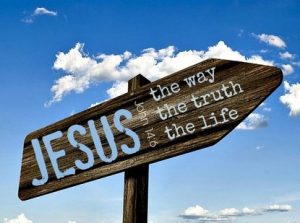 Contained in the Gospel According to John are a series of “I AM” statements. In several places, Jesus gives good news to people by claiming that what they need – He is.

“Do not let your hearts be troubled. Believe in God, believe also in me. In my Father’s house there are many dwelling places. If it were not so, would I have told you that I go to prepare a place for you? And if I go and prepare a place for you, I will come again and will take you to myself, so that where I am, there you may be also. And you know the way to the place where I am going.” Thomas said to him, “Lord, we do not know where you are going. How can we know the way?” Jesus said to him, “I am the way, and the truth, and the life. No one comes to the Father except through me. If you know me, you will know my Father also. From now on you do know him and have seen him.”
John 14:1-6

I started paying closer attention to Christianity in the 1970’s. I became a teenager early in that decade, and the faith that others had shared with me became a personal adventure as I grew. I remember way back then seeing the cover of a contemporary translation of the Bible called “The Way”. It was mod (or trendy) as it attempted to engage a younger generation in God’s Word. When I read some of the New Testament for myself, I discovered that in the Acts of the Apostles, the first followers of Jesus had called their movement “the Way.” Maybe a holdover from when Jesus told his disciples: “I AM the way and the truth and the life.”

Jesus went on to tell his disciples that he was the truth. As I immerse myself in his words, reading again in Matthew, Mark, Luke, and John, and seeing how he showed us God in human flesh, many of the things I encounter in this world on a daily basis seem to come into focus and make more sense.

And Jesus said he was the life. Asking Jesus to walk alongside me on the way while searching his Words for a clue to my true place in this world, has made my life much more meaningful as the decades have marched on. I hope you too are somewhere along The Way.

Lord Jesus, help me to walk each day in the way that brings You glory. Thank You for sharing the truth with us in Your Word, so that our lives can be rich and full as we follow You. Amen.