When in Our Music God is Glorified ~ Hymn 641 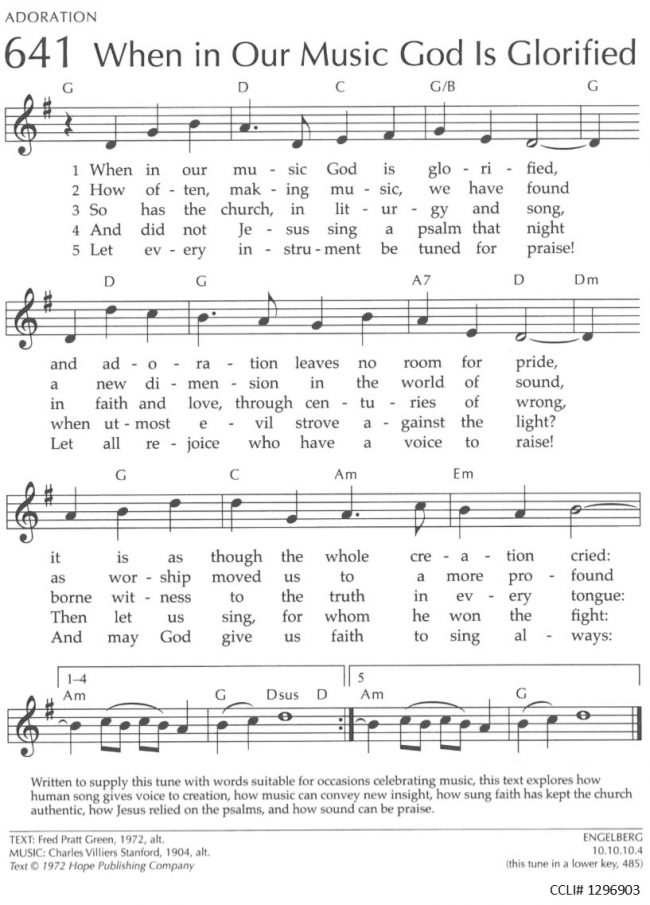 When I was a child, I sang in the children’s choir at the First United Presbyterian Church in Olney, Illinois. When I was a teenager, the young ladies at Forest Hills Presbyterian Church in Tampa wanted the young men to join then in the youth choir, and I was one who did. And while I don’t sing now in our church’s choir, I lend my voice to the hymns each Sunday as a way to glorify God.

Hymn 641 – When in Our Music God is Glorified sometimes seems to be the choir member’s hymn. It might well have been sung by some of the Levites and David:

4 He appointed certain of the Levites as ministers before the ark of the Lord, to invoke, to thank, and to praise the Lord, the God of Israel. 5 Asaph was the chief, and second to him Zechariah, Jeiel, Shemiramoth, Jehiel, Mattithiah, Eliab, Benaiah, Obed-edom, and Jeiel, with harps and lyres; Asaph was to sound the cymbals, 6 and the priests Benaiah and Jahaziel were to blow trumpets regularly, before the ark of the covenant of God.

7 Then on that day David first appointed the singing of praises to the Lord by Asaph and his kindred.

8 O give thanks to the Lord, call on his name,
make known his deeds among the peoples.
9 Sing to him, sing praises to him,
tell of all his wonderful works.
10 Glory in his holy name;
let the hearts of those who seek the Lord rejoice.
11 Seek the Lord and his strength,
seek his presence continually.
12 Remember the wonderful works he has done,
his miracles, and the judgments he uttered,
13 O offspring of his servant Israel,[a]
children of Jacob, his chosen ones.

Let us all rejoice who have a voice to raise, and may God give us faith to sing always. Alleluia! Amen.