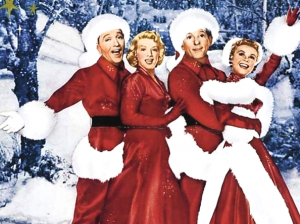 The Second Sunday of Advent

“When they had heard the king, they set out; and there, ahead of them, went the star that they had seen at its rising, until it stopped over the place where the child was. When they saw that the star had stopped, they were overwhelmed with joy. On entering the house, they saw the child with Mary his mother; and they knelt down and paid him homage. Then, opening their treasure chests, they offered him gifts of gold, frankincense, and myrrh. And having been warned in a dream not to return to Herod, they left for their own country by another road.” Matthew 2:9-12 (NRSV)

White Christmas is a classic musical starring Bing Crosby as Bob Wallace, and Danny Kaye as Phil Davis. The film is about two World War 2 vets, Bob Wallace and Phil Davis, who have made it big in show business. Eventually, Bob and Phil meet the Haynes sisters, a musical duo traveling to Vermont to perform in a ski lodge. Bob and Phil decide to join the sisters to get a bit of a vacation. Once in Vermont, much to their surprise, there was no snow! Even more surprising was that the ski lodge, which was financially struggling, was owned by Bob and Phil’s old general from their days in the army. While staying at the lodge, Bob and Phil realize that the general thinks he is not important to anyone anymore. They proceed to go on TV and ask anyone that was in their regiment to come and sing for the general to show that he really does matter. Much to the surprise of the general, almost the entire regiment shows up, making the general one of the happiest men on earth. It makes Bob and Phil even happier.

We learn during the Christmas season that it is better to give than receive and much like Bob and Phil giving this surprise to the general, the Wiseman came to Jesus and brought him the gifts of gold, frankincense, and myrrh. White Christmas not only teaches this wonderful lesson, but it is a fun movie for the entire family.

Giver of all good things, we are truly blessed Lord and we pray that we are reminded of that during the Advent season. Help us to give of our time, talents, and treasures to what You have planned for us. May we find joy in the little things that You ask us to give on a daily basis. It’s all for You Oh Lord. Amen.