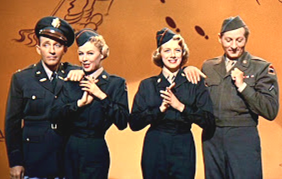 But she was much perplexed by his words and pondered what sort of greeting this might be. The angel said to her, “Do not be afraid, Mary, for you have found favor with God. And now, you will conceive in your womb and bear a son, and you will name him Jesus. He will be great, and will be called the Son of the Most High, and the Lord God will give to him the throne of his ancestor David. He will reign over the house of Jacob forever, and of his kingdom there will be no end.” Luke 1:29-33 (NRSV)

White Christmas is a movie I’ve enjoyed since childhood. Before the days of DVDs, my mother, sister, and I would anxiously await the announcement of when it would be shown on network TV and plan our schedules so we could watch it together. Thankfully we are no longer limited to network TV scheduling, thus making it easier to continue the tradition of watching White Christmas. Even my children, now grown, who used to groan and roll their eyes when I announced viewing night – now look forward to watching it. Part of the tradition includes uttering the same comments year after year. ”Can you believe how high they, (Bob and Phil), wore their pants”! “How tiny do you think her, (Judy), waist REALLY was”? And of course we sing the songs…?Sisters” being my personal favorite.

I honestly don’t know that I’d ever given too much thought about whether White Christmas had a religious theme. I’ve just always equated it with a special time shared with family and friends. Once giving it a little thought, however, the themes of self-sacrifice and loyalty quickly come to mind. An often repeated phrase in the movie when Bob and Phil question why they are doing a seemingly irrational act of kindness is, “Let’s just say we’re doing it for an old pal in the army”. This one phrase demonstrates the loyalty they have for the men with whom they served. In the opening scene, Bob and Phil are staging a musical production for the troops to honor their beloved General Waverly who is being replaced. Later in the movie we learn why General Waverly is so highly esteemed. Bob describes his leadership style. “We ate, then he ate. We slept, then he slept.” General Waverly put the welfare of his men above himself. Another example of self-sacrifice also occurs early in the film. During the musical production, the troops come under enemy attack. Phil pushes Bob out of the way of a falling wall, saving Bob’s life and injuring himself in the process. A third example is when Wallace and Davis decide to bring their show to Vermont and plan a reunion of their army unit to honor General Waverly. They do so at a huge personal financial cost. Bob refuses the suggestion to exploit the fact that the general has fallen on hard times as a way to recoup their financial losses. One could even stretch and say that the comical scenes about Phil and Judy’s faked engagement is a sacrifice on their part in a misguided attempt to encourage Bob and Betty to pursue a relationship.

The themes of self-sacrifice and loyalty do indeed seem to permeate White Christmas. In reading the Christmas story, I am reminded of the sacrifice of Mary who must have suffered the embarrassment of being an unwed mother and the loyalty of Joseph who surely endured ridicule by agreeing to honor his promise to marry Mary, although he had every reason not to do so. Thus begins Christ’s ministry of self-sacrifice and His instructions for how we are to live our lives through service and putting others above ourselves. May we not forget to focus on these teachings during Advent – remembering to take time to serve those less fortunate or in need of companionship.

God of all grace, we come to You in anticipation as this glorious season of Advent begins. Help us to re-focus our lives to live more like Christ, focusing on others and their well-being. Draw us closer to You, one another, and to the love of Jesus Christ. Amen.