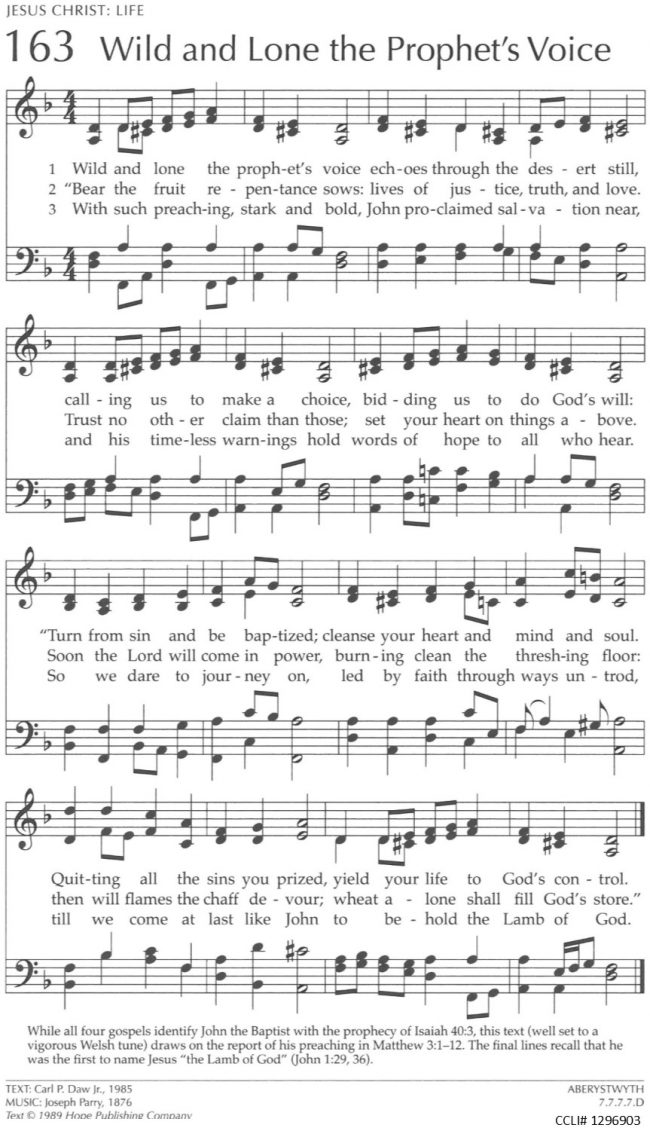 In those days John the Baptist appeared in the wilderness of Judea, proclaiming, “Repent, for the kingdom of heaven has come near.” This is the one of whom the prophet Isaiah spoke when he said, “The voice of one crying out in the wilderness: ‘Prepare the way of the Lord, make his paths straight.” Now John wore clothing of camel’s hair with a leather belt around his waist, and his food was locusts and wild honey. Then the people of Jerusalem and all Judea were going out to him, and all the region along the Jordan, and they were baptized by him in the river Jordan, confessing their sins. But when he saw many Pharisees and Sadducees coming for baptism, he said to them, “You brood of vipers! Who warned you to flee from the wrath to come? Bear fruit worthy of repentance. Do not presume to say to yourselves, ‘We have Abraham as our ancestor’; for I tell you, God is able from these stones to raise up children to Abraham. Even now the ax is lying at the root of the trees; every tree therefore that does not bear good fruit is cut down and thrown into the fire. “I baptize you with water for repentance, but one who is more powerful than I is coming after me; I am not worthy to carry his sandals. He will baptize you with the Holy Spirit and fire. His winnowing fork is in his hand, and he will clear his threshing floor and will gather his wheat into the granary; but the chaff he will burn with unquenchable fire.”

John the Baptist may have attracted many people who were eager to hear his message. It was not because he was stylishly attired…camel hair tunic cinctured with a leather belt! It was not because he ate well and enjoyed delicacies…locusts and wild honey. He was a fiery preacher…calling people to repent and be baptized. Crowds came out to hear him and see him. They came from Jerusalem and all the villages along the Jordan River. After confessing their sins, John baptized them in the Jordan River.

John baptized with water for repentance. John speaks of One who is more powerful than himself and who will baptize with the Holy Spirit. He will also separate the grain from the chaff.

The text, Matthew 3:1-12, reports John the Baptist’s preaching. He is identified the prophecy of Isaiah 40:3. John paved the way for Jesus’ ministry and as is seen in Matthew 3:13-17, John identifies Jesus as the Lamb of God and John baptizes Jesus, an action John felt unworthy to do.

This hymn is only 35 years old, and it was written by Carl P. Daw, Jr. The words are set to a spirited Welsh tune: ABERYSTWYTH. The words John addressed to his hearers address us today. No less than his original audience are we called “to turn from our sins and be baptized,” to cleanse our hearts, minds, and souls, “and to cling to hope and to walk by faith.”

O God, we thank You that John identified Jesus as the Lamb of God and that we know that special name for Him. Jesus is the Lamb of God, who takes away the sins of the world. He has taken away our sins – so that we have received forgiveness and become heirs of eternal life. Thank You, Lord! Amen.