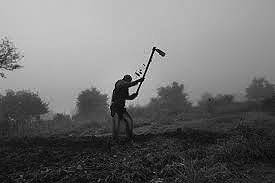 Then I saw and considered it; I looked and received instruction.
Proverbs 24:32 (NRSV)

I realize this television program dates me, but it presents a perfect illustration for this devotional. Long before Bob Denver became known as Gilligan of Gilligan’s Island he appeared as a beatnik named Maynard G. Krebbs in The Many Loves of Dobie Gillis. Maynard was always a consternation to grocer Henry Gillis, Dobie’s father. Maynard had an aversion to work of any kind and whenever he even mentioned the word, “work” his voice went up two to two and a half octaves.

Obviously those tending the field and the vineyard described in Proverbs 4:30-34 also had an aversion to work. The field was overgrown with thorns, covered with nettles and the stone wall was in need of repair. The workers are noted as being lazy and stupid, accounting for the deteriorating condition of the field and vineyard.

The observer sees that poverty and want are “in the picture” for the lazy and stupid workers, unless they reform and do so quickly. The observer has seen the absence of work and has received instruction from it. God Himself had worked six days in creating the world and so if work was good enough for God, then it is surely good enough for us. Perhaps the observer is knowledgeable of Genesis 2:15: “The Lord God took the man and put him in the Garden of Eden to till it and to keep it.” When God put the man in the garden to till it and keep it, God judged these labors as good. Thus, from the beginning God intended for man to work … to labor for his daily bread and to derive satisfaction from each day’s toil. Work was good!

We know that with humankind’s sin, God said, “cursed is the ground because of you; in toil you shall eat of it all the days of your life … By the sweat of your face you shall eat bread until you return to the ground ….” Punishment for man’s disobedience was that work would be much more difficult and that fatigue and sweat would accompany the hard labor. If the lazy and stupid won’t work, then they should not be surprised when they experience poverty and want. Perhaps that consequence will yet be avoided, if they will but apply themselves and discover that work is good.

Creator God, we thank You for working the six days of creation and for setting a good example for us. We thank You that we too have learned that work is good, that we need to work for our daily bread and that we derive satisfaction from a good day’s work. In Christ’s name, we pray. Amen.