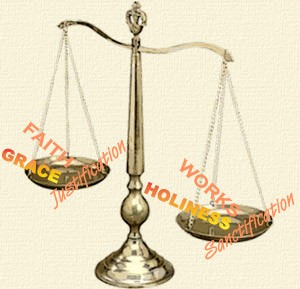 James is known in some circles as the “theological workaholic” of the New Testament. Where the Apostle Paul is famous for his grace/faith passages, James is right in there pitching the concept of holy work. And when these two streams get caught up in the whole discussion of salvation, these seem to be fighting words.

What good is it, my brothers and sisters, if you say you have faith but do not have works? Can faith save you? If a brother or sister is naked and lacks daily food, and one of you says to them, “Go in peace; keep warm and eat your fill,” and yet you do not supply their bodily needs, what is the good of that? So faith by itself, if it has no works, is dead.

But someone will say, “You have faith and I have works.” Show me your faith apart from your works, and I by my works will show you my faith. You believe that God is one; you do well. Even the demons believe—and shudder. Do you want to be shown, you senseless person, that faith apart from works is barren? Was not our ancestor Abraham justified by works when he offered his son Isaac on the altar? You see that faith was active along with his works, and faith was brought to completion by the works. Thus the scripture was fulfilled that says, “Abraham believed God, and it was reckoned to him as righteousness,” and he was called the friend of God. You see that a person is justified by works and not by faith alone. Likewise, was not Rahab the prostitute also justified by works when she welcomed the messengers and sent them out by another road? For just as the body without the spirit is dead, so faith without works is also dead. James 2:14-26

I am tugged both ways in this conversation. I have come to treasure the graceful notes of Paul, realizing that there is nothing I can do (or need to do for that matter) to earn God’s love and salvation. Those are graciously given. But then I also see the importance of what I do (works) as a child of God who has been redeemed and saved. Help!

I’ll try again today to make my faith a lively thing by what I do in response to God’s grace!

Thank you, God, for Your unconditional love. I’d like to love You and Your world filled with people in return, in Jesus’ name. Amen.