Worse and Much Worse Than Being Poor 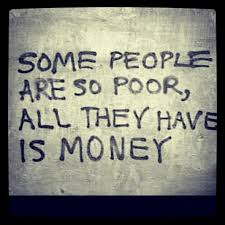 Better to be poor and walk in integrity than to be crooked in one’s ways even though rich.
Proverbs 28:6

Much worse than being poor is having acquired wealth in deceitful and underhanded ways. It is sad when the rich could have paid their poor workers a decent salary so that they might enjoy a better and easier life. It is sad when rich people have cheated others or stolen from others to amass their wealth. It is sad when rich people have walked by or looked the other way from people seeking help. It is sad that their hardened hearts could not extend compassion to the poor. It is sad that the rich could not share some of their wealth rather than being greedy and selfish. Much worse than being poor are the rich who have gained or retained their wealth by having taken advantage of or having oppressed others. By the world’s standards the wealthy seem privileged and yet in Your eyes, O Lord, they may be much worse off than the poor.