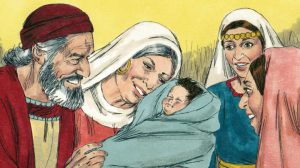 According to my research, opera began in Italy near the end of the 16th century. Opera is a form of theater where music plays a major role and singers have the principal parts. It differs from musical theater in that there are songs and speech in the latter. Both opera and musical theater have casts, costuming, sets, orchestra, dancing or ballet, and singing. Reading the “Zechariah” selection from The Spark Story Bible, it would seem Zechariah may have introduced opera in Biblical history.

“When their baby boy was just eight days old, Elizabeth and her husband Zechariah took the baby to the temple. It was time to give the baby a name. They chose the name John.

But Zechariah couldn’t keep quiet. Even if John was sleeping, Zechariah had to share the words God gave him with all the people in the temple. Zechariah was so excited that he sang the good news from God. Zechariah’ song told about two babies – John and Jesus.

Costuming: We may presume that Zechariah and Elizabeth were wearing their “Sabbath Best” clothes.

Set: The temple served as the stage and set where this music and action takes place.

Orchestra: If there were musicians at the temple, they may have joined in and given accompaniment to John’s solo.

Dancing: Though we cannot say with certainty that Zechariah was given to some swaying, tapping his feet or even leaping for joy, his excitement that stirred him to sing could also have pushed him to movement.

Singing: There are some people who dislike the musical theater and opera, feeling that singing about everything can trivialize life. Others appreciate how people expressing emotions, e.g. joy or sadness give way to singing. Zechariah was so overjoyed that just telling about John and Jesus’ futures was not enough. He had to sing about the great things John and Jesus would do!

O God, the Psalmist often commended worshipers to “sing a new song to the Lord.” As we count our blessings, we realize just how much about things we need to sing. Truly You do great things for us and rightfully songs of praise should always be on our lips. In Christ’s name, we pray. Amen.