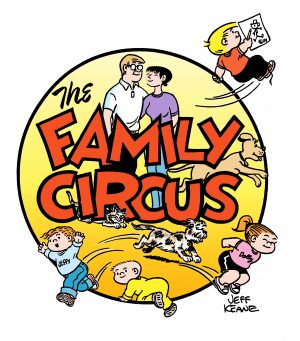 Having received permission from Jeff Keane, cartoonist of The Family Circus, the theme of this year’s Bright Sunday celebration is: Comics Alive! Saints Alive! Bil Keane began the single panel comic strip in February 1960. Some years before Bil’s death in 2011, his son Jeff began assisting his father with the strip. The strip is known for its gentle humor and emphases on family values and religious faith. So, on our 21st anniversary of Bright Sunday we give thanks to Bil and Jeff Keane and The Family Circus for the entertainment they have brought us for fifty-nine years!

We hope you will come and join us for this year’s Bright Sunday service at 10 am on April 28 as we bring the comic strip to life. Wear your most colorful clothes! Got clothes that date back to or reminiscent of the 1960s, then wear them. Come prepared to chuckle, giggle, laugh, and smile! Please bring a flower or two to adorn our wood cross in the narthex. Come and see the release of the butterflies at the close of the service!