Easter Reflections: Why do you seek the living One among the dead? 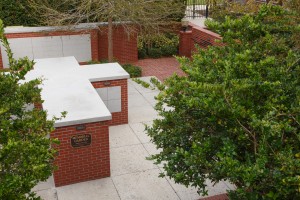 Not far from my parents’ home in Thomasville, North Carolina, is a cemetery perched on a hill with a pond frequented by Canadian geese and different kinds of ducks. Holly Hill Memorial Park is a well maintained cemetery that has expanded over time and includes both stone and bronze markers. With its nice roads, sidewalks and benches it is a nice place to walk away from traffic, to meditate and to pray. Over the years I have strolled through that park and seen the final resting places of a number of people I got to know after my parents and I moved to that town in the Old North State over forty years ago.

Often when we have returned to North Carolina I have walked those grounds and paid my respects to a friend named Jack. He had a wonderful personality and was a great singer. For several years we sang in a community production entitled An Evening of Music to benefit our local hospital. Jack and I sang tenor, and he was much better at it than I was because I probably should have been singing second tenor. The problem was one of my favorite numbers we sang in this production was David Wilhousky’s arrangement of The Battle Hymn of the Republic. The first tenor line really soars with “In the beauty of the lilies Christ was born across the sea, With a glory in His bosom that transfigures you and me, As He died to make men holy let us live to make men free while God is marching on.” Standing beside Jack I was inspired to reach those high notes. I never hear that anthem without thinking of my friend who left this world too soon. I have no doubt that as he lent his voice to his church choir and other singing venues, he now sings with the angels.

I am grateful for my memories of Jack and the good times we had singing together. I know Jack’s earthly remains are interred at Holly Hill, but I believe Jack is now in the presence of God. I go to that cemetery expecting nothing more than recalling those times and hoping to see him again when I join the celestial choir.

According to the evangelist Luke, the women came to the tomb early on that Sunday morning and their expectations must have been like mine. Instead they were greeted by two men in dazzling apparel (angels). The women were frightened and prostrated themselves before them. The men asked, “Why do you seek the living One among the dead? He is not here, but He has risen.” They announce that Jesus is alive where the women thought he lay dead. The men say, “He is not here,” indicating that unlike Lazarus when raised had to be unbound, Jesus was not bound by grave clothes and furthermore, He resumed movement and life. Jesus was not in the tomb anymore! Jesus is risen … Jesus has been raised. The men remind the women of what Jesus had said earlier when predicting His death and resurrection. Jesus lives!

Almighty and Gracious God, thank you for raising Jesus from the dead to new life and for making us heirs of eternal life through our faith in Christ our Savior. Amen.

God is HERE All Year