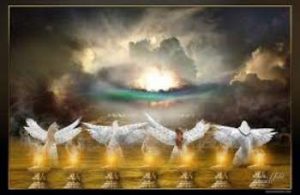 A couple of days ago, I wrote some reflections on “the four horsemen” from the book of Revelation. (My apologies for such a lengthy focus on a less than positive numerical reference in the scriptures.) I want to double back today and redeem Revelation and the number four with another reflection:

“Holy, holy, holy,
the Lord God the Almighty,
who was and is and is to come.”

“You are worthy, our Lord and God,
to receive glory and honor and power,
for you created all things,
and by your will they existed and were created.”
Revelation 4:1-11

In looking at scriptures to use with the member of the Confirmation Class as we talk about worship, these words in Revelation 4 jumped off the page. It’s a scene of heavenly worship, with God seated on a throne. And who bows down before our God? The twenty-four elders – AND four living creatures:

A lion – the king of the wild beasts
An ox – the strongest of the domesticated animals
An eagle – the grandest of those that fill the skies
And a human.

In heavenly worship, all created beings will bow before God Almighty. And we can take our place even today.

Great God, Creator of all that is, let me fall on my knees today and every day as I worship you. Amen.