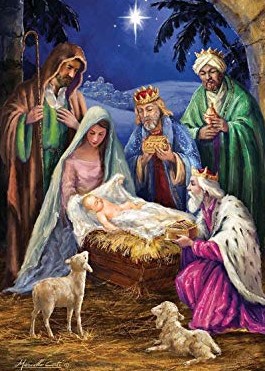 From the beginning of the world, people have chosen not to listen to God! It has happened a lot! You will remember that Adam and Eve chose to listen to the serpent rather than to God. Later, we saw how the Israelites complained and grumbled while in the wilderness. They did not listen, and they did not believe that God would take care of them. Before the Ten Commandments were delivered to the people, they made and worshipped an idol, a golden calf, rather than the Living God. Yes, people have often chosen to ignore God and not to listen to what the Lord says for their own good!

“God sent a prophet, Isaiah, to talk with King Ahaz. Isaiah did what God asked him to do. His job was to be God’s voice. Isaiah warned King Ahaz that bad things would happen to him and his people if he did not listen to God. Isaiah promised God would protect King Ahaz and his country if he listened. God even gave King Ahaz a sign to look for – a child to show him the way.”

King Ahaz was warned. Why should mighty King Ahaz listen to the prophet Isaiah?

King Ahaz was given a sign. Why should he believe and not do what he wanted to do?

Hard headed King Ahaz! Stubborn King Ahaz! He brought the affliction and suffering on himself and his own people because he refused to listen.

“Isaiah said a child would be born and live with the people. His name would be Immanuel. Immanuel means ‘God with us.’ Then the people would know how much God loved them and they would listen to God.”

Other people, the Israelites, did listen to God. They remembered God’s promise. They waited and waited. Then, in God’s time, God’s sign … God’s gift of love to the world … His Son, Immanuel was born.

O God, it is sad, but true, that we often bring sadness and suffering on ourselves because we do not listen to You … to our parents or grandparents … to our teachers and coaches … to doctors and nurses … to police officers and officials. Forgive us. Help us to be better listeners and to be faithful followers. In Christ’s name, we pray. Amen.