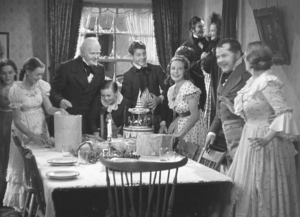 “I have come to call not the righteous but sinners to repentance.” Luke 5:32 (NRSV)

Although this classic novella by Charles Dickens has been adapted into films since as early as 1901 (Scrooge; or Marley’s Ghost) and as recent as 2013 (the made-for-TV movie The Smurfs Christmas Carol) it was when I saw a staged performance while at the University of Florida in the late 1980s that I became aware of the importance and permanence of this story of repentance, reconciliation and redemption.

Of the over 50 cinematic and made-for-TV versions of A Christmas Carol, my family and I have watched close to half of them. Each Christmas season, we check out several different copies from the library, dust off the copies we own, and search for versions we have not yet encountered. The quest for new versions of this classic and the ambition to watch as many as we can in the weeks before Christmas sometimes becomes a mania with us. And each year, as the season nears its finale, we are certain to have a discussion on which version we like best. Everyone in the house has a favorite; some have more than one. Sadie is fond of the 1999 Patrick Stewart version while Hadley goes for Bill Murray in Scrooged (1986). Bethany enjoys A Carol Christmas (2003) with Tori Spelling and I’ve always liked the 1938 version starring Reginald Owen as Scrooge. However, the film we all agree is the best of the best is The Muppet Christmas Carol (1992) – watching this awesome adaptation has become a Christmas Eve tradition in our home.

Interestingly enough, no matter which version you choose to enjoy, you will find a timeless story of heavenly intervention, humble repentance, and joyful salvation. The story as crafted by Dickens is laden with biblical themes and allusions, many which get lost when translated to the screen for a 21st century audience. However, whether Scrooge is being played by Mr. Magoo, George C. Scott, or Yosemite Sam, what is not lost is that humans are selfish, contemptible, stingy creatures traveling alone toward the grave. Only with spiritual intervention and sincere repentance, can we find the appropriate relationship with those fellow humans around us and the hope for reconciliation with the spirits who will come later. Each year, I watch as many versions of this story as I can to remember where I’ve been and how I could end if I fail to keep Christmas in my heart all year.

Lord of all and Giver of life, as we continue on our Advent journey we pray that You will remind us to keep our eyes Heaven bound. Help us to focus on Your unconditional love and how we can spread that love to everyone we meet along life’s way. We pray that no matter the day or time of year, we can keep Christmas in our hearts all through the year. Amen.