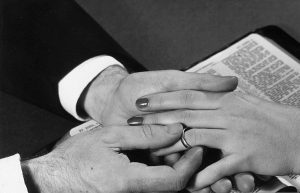 He who finds a wife finds a good thing, and obtains favor from the Lord.

What I do remember is this: The chapter was about a woman named Estelle. She was introduced in a humorous book entitled The Grass Is Always Greener over the Septic Tank by the late columnist, Erma Bombeck. She wrote about Estelle, who was both envied and resented by the mothers and wives in the neighborhood. The one task that Erma wrote Estelle did, of which I am certain, is that she “rolled up the garden hose in the winter,” and presumably stored it in the garage or basement.

The things of which I am not certain are that Estelle: baked her own bread, made her own clothes, played the piano, arranged flowers for her church, included notes and surprises in her children’s lunch boxes, served as President of the PTA, always did her spring cleaning, hosted the neighborhood’s community picnic twice a year, built birdhouses and did other small wood craft projects, was a member of the Junior League, decorated her home inside and out for every holiday, arranged play dates for her children two to three weeks out, collected for the Cancer Society and the Heart Fund, wrote a two page Christmas letter complete with family photos and always mailed them on the Friday after Thanksgiving, cleaned her husband’s golf clubs, selected his suits, regularly took both family vehicles for servicing and tire rotation, played tennis and bridge, and maintained her figure, dress size, and weight to what they were when she graduated from college.

Erma told a great story and I laughed and I have never forgotten the fictional Estelle, who nevertheless was probably based on a real person Erma knew. I am still convinced that any man finding a woman like Estelle for a wife and the mother of his children would be truly blessed. In all honesty the best wives and the best husbands can’t do it all and be all for the other one, yet they can be companions and of help to one another. In Ecclesiastes 4:9, 10a, 11a we read, “Two are better than one because they have a good reward for their toil. For if they fall, one will lift up the other,… Again, if two lie together, they keep warm; …..” Indeed, he, who finds a wife, and she, who finds a husband, find a good thing and obtain favor from the Lord.