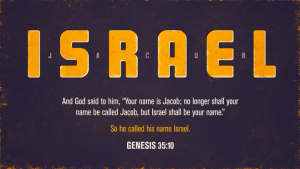 “God said to him, ‘Your name is Jacob, no longer shall you be called Jacob, but Israel shall be your name.’ So he was called Israel.” Genesis 35:10 (NRSV)

When the boys were born, Isaac and Rebekah named their children, Esau and Jacob. The eldest, Esau, was red and hairy. Jacob, his younger brother was born clutching the heel of his elder brother, Esau. From the beginning, Jacob wanted to be the first son … the eldest son … and the closest he could come to that position was by grasping Esau’s heel as he was delivered.

From the beginning Jacob was a schemer … doing whatever it took to get what he wanted. While Jacob preferred remaining in the tents while Esau was in the field hunting, he cooked not only savory stews but schemes. One day his brother Esau returned famished from a day in the field. Jacob said I will give you a bowl of this lentil stew if you will give me your birthright. Jacob would take advantage of his brother. That which should have been priceless to Esau was sold to his brother Jacob for a meal and Esau would get hungry again, but he would not have another birthright to sell.

Another day, Rebekah prompted her favorite son, Jacob, to steal his father’s blessing that rightly belonged to Esau, the eldest son. Isaac’s eyesight was poor and he was tricked by the hairy animal skins Jacob wore as he served his father some savory game. Jacob deceived his father, stole his brother’s blessing and fled for the hills to escape Esau’s justified wrath.

One night Jacob was camped by the Jabbok and a man wrestled with him until daybreak. It was a great struggle and finally the man put Jacob’s hip out of joint. Jacob was strong and would not let the man go until he had blessed him. Jacob was conniving, determined and fierce even when striving with God.

Having been reconciled with Esau, Jacob begins a new chapter of his life. He assumes a new identity. God says, “No longer shall you be called Jacob, but Israel shall be your name.” As the grandson of Abraham and the youngest son of Isaac, Jacob will now be known as Israel and his name will refer to the land that Abraham’s descendants shall occupy as well as the corporate name for God’s people. By God’s grace Jacob has been reformed and is given a new name, Israel.

At our baptism, we are asked “What is your name?” or “What is your child’s name?” before we receive the sacrament of grace. That name is spoken and we are then baptized. Emerging from those waters, we are given another name … a new name and a new identity. That name and identity is “Christian.” From that time forth we are called to live up to that name by trusting in Jesus Christ as our Lord and Savior, obeying his word and showing his love.

Blessed Lord, we thank You for giving us life and new life in Jesus Christ. Through our baptism, we receive a new name and a new identity. Help us to live up to the name “Christian” by trusting in Jesus as our Lord and Savior, obeying his word and showing his love. In Your holy name, we pray. Amen.