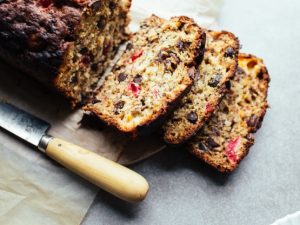 It was Christmas time 1986 and I had begun my pastorate of the Pearisburg Presbyterian Church in Pearisburg, Virginia, about ten weeks earlier. A member of the church, who later served on Session during my tenure there, presented me with my first Gift of the Magi Bread. This would be a new taste experience for me. As I had already received a number of food gifts for Christmas, I saved this treat for Epiphany. I immediately liked it and asked her for the recipe. She obliged. Gift of the Magi Bread is delicious and very festive. Try it, and even if you hate fruitcake, you might find that you really like this bread!

Gift of the Magi Bread

In a large mixing bowl, cream butter and sugar until light and fluffy. Beat in eggs and vanilla. Combine the flour, baking soda and salt; add to the creamed mixture alternately with the bananas. Stir in the oranges, coconut, chocolate morsels, 1/2 cup almonds, cherries and raisins, dates or figs.

Pour into two greased 8 inch by 4 inch by 2 inch loaf pans. Sprinkle with the remaining almonds. Bake at 350 degrees for 50-55 minutes or until a toothpick inserted near the center comes out clean. Cool for 10 minutes before removing from pans to wire racks to cool completely. Yield: 2 loaves.

7 Then Herod called the Magi secretly and found out from them the exact time the star had appeared. 8 He sent them to Bethlehem and said, “Go and search carefully for the child. As soon as you find him, report to me, so that I too may go and worship him.”

9 After they had heard the king, they went on their way, and the star they had seen when it rose went ahead of them until it stopped over the place where the child was. 10 When they saw the star, they were overjoyed. 11 On coming to the house, they saw the child with his mother Mary, and they bowed down and worshiped him. Then they opened their treasures and presented him with gifts of gold, frankincense and myrrh. 12 And having been warned in a dream not to go back to Herod, they returned to their country by another route.

O Lord, the magi traveled a great distance to worship you and to present their precious gifts of gold, frankincense and myrrh. We thank you that we can worship you wherever we may be. We thank you too for all of the good gifts we receive from your bounty, especially family, friends and food. Nourish our bodies with this food so we may faithfully follow you even as the Magi relentlessly followed the star until they found you. In Jesus’ name, we pray. Amen.