A Time to Mourn, a Time to Weep 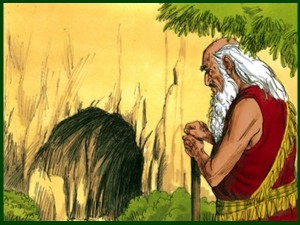 “Sarah lived one hundred and twenty-seven years; this was the length of Sarah’s life. And Sarah died at Kiriatharba (that is Hebron) in the land of Canaan; and Abraham went in to mourn for Sarah and to weep for her.” Genesis 23:1-2 (NRSV)

According to Genesis 17:17, we learn that there was a ten year age difference between Abraham and Sarah. According to Genesis 12, the story known as “The Call of Abram,” we learn that Abraham and Sarah were husband and wife when they were called by God to leave Haran and thus their respective ages were seventy-five and sixty-five years old. What we don’t know is how long Abraham and Sarah had been married prior to the call. What we can deduce is that at the time of Sarah’s death, Abraham was one hundred and thirty-seven years old and he and Sarah at the very least had been married for sixty-two years and it is highly likely that they had been a couple for many more. They had grown old together and they had many memories of their life together.

We do not know if Sarah had been in declining health for some time. We do not know if she died without any warning or of an acute attack. What we do know is that with her death, Abraham’s life was not the same. He was bereft of her, the one with whom he had become one flesh.

Now Abraham has lost his life’s partner and understandably he is grieved. They had been married the greater part of their lives and had spent much more time together than they ever had within their family of origin (with mother, father, sisters, and brothers) or as single late teens or young adults. Abraham mourns for Sarah. Abraham weeps for Sarah. In Ecclesiastes 3:4, we read that there is “a time to weep and a time to mourn.” That is exactly what time it is for Abraham and that is exactly what he does.

In my almost thirty years of ministry, one thing that I have learned as I have observed grief, is that everyone deals with bereavement differently. There is no set way of grieving. However, when someone loses a loved one through death always there is mourning and weeping. Some may try to keep their emotions under wraps. Some may shield their tears from others’ view. Some may pretend to accept death as a part of life and thereby delay their grieving. When we lose a loved one, even when we know that they cannot get better and when we know that they are bound for the Promised Land of Heaven, we mourn for that person and we mourn for ourselves for our sense of loss. Upon the death of a loved one, it is always a time to weep and a time to mourn.

Holy Comforter, we pray this day for all who weep and who mourn for the loss of a loved one. Embrace them in Your loving arms and console their troubled hearts. Help us to reach out to them also and thus make Your presence with them even more tangible. Keep us mindful that our best ministry to those who are grieving is not so much sharing words, unless they are memories, but in being present … to listen, to love, to care and support. In Jesus’ name, we pray. Amen.